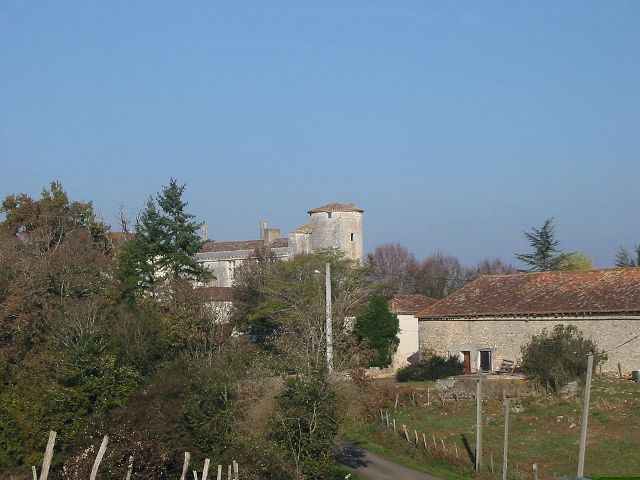 Location: Saint-Projet-Saint-Constant, in the Charente departement of France (Poitou-Charentes Region).
Built: Moyen Age-19th century.
Condition: In good condition.
Ownership / Access: Privately owned.
ISMH Reference Number: PA16000036
Notes: Château de Puyvidal dominates the Bandiat Valley to Saint-Projet-Saint-Constant near La Rochefoucauld in the Charente. Vidal who gave his name to the mound and the castle remains unknown, the first Lord is attested Guyot David honoring in 1267 the count of Angouleme Hugh de Lusignan. Castle Puyvidal by women in dowry or inheritance changed several times and family happening in 1456 at Charles de Livron. Family Livron keep Puyvidal until 1908. It was listed as a historic monument on 18 September 2006. The three cylindrical towers may date from the thirteenth century. The northwest tower was replaced in 1810 by a rectangular flag. The south-west tower could have been a Hall of Justice, but its transformation into apartment destroyed specifics. The dwelling, rectangular fortified house, rebuilt in the fifteenth century is pierced with mullioned windows. It is backed by the remains of the north curtain wall. The door, prismatic moldings, opens onto a staircase out, something unusual at that time, the screw being lit by windows framed. Its structures were changed in the nineteenth century transforming the roofs flat roofs. The nineteenth-century building was constructed in place of the curtain and the medieval gate.