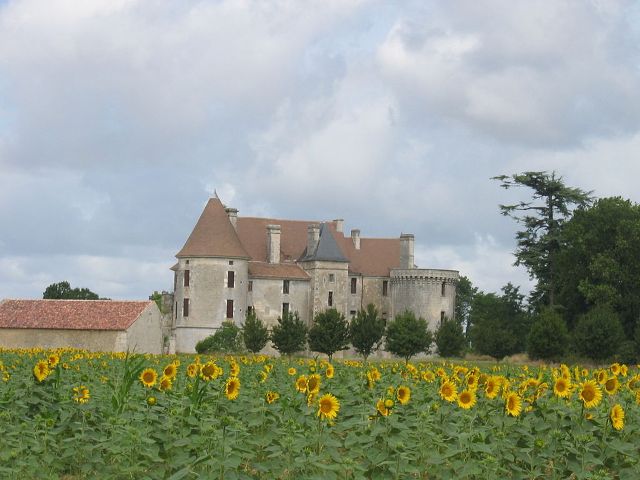 Location: Rioux, in the Charente-Maritime departement of France (Poitou-Charentes Region).
Built: 15th-18th century.
Condition: In good condition.
Ownership / Access: Privately owned.
ISMH Reference Number: PA00104859
Notes: Château de Rioux is located north of the village of Rioux, Charente-Maritime. The barony of Rioux is confiscated at the Maison de Didonne, and passes through many hands from 1302. The castle is repaired in 1619 by Georges Lemusnier then in 1716 by Henri de Mirande. It is now the Rémont families, and Delmas Ecochard that own them. A stone bridge with two arches succeeded the drawbridge. In a rectangular enclosure surrounded by ditches, reinforced curtains which were equipped with gunboats, the house is preceded by a barnyard. This is a one storey building and narrow openings, basement without opening and covered with a gable roof of flat tiles. Stage left a polygonal staircase tower was leveled. Two cylindrical towers flank the other façade, with a walkway and one with conical roof and a small square tower with slate roof rests at the center of this facade. It is registered historic monument since October 5, 1965.

How To Get To Château de Rioux (Map):