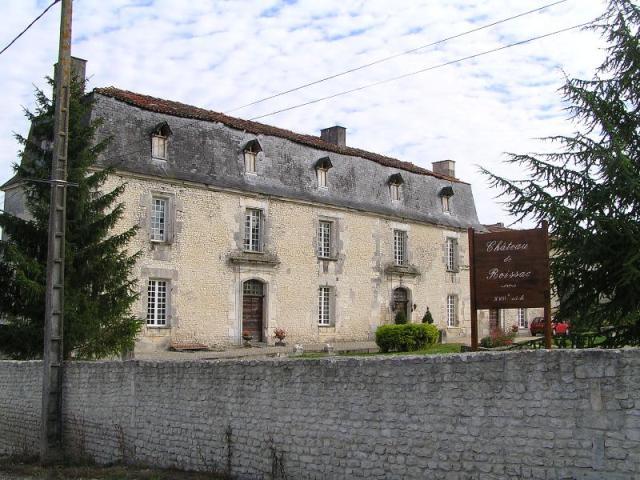 Location: Angeac-Champagne, in the Charente departement of France (Poitou-Charentes Region).
Built: 18th century.
Condition: In good condition.
Ownership / Access: Privately owned.
ISMH Reference Number: PA00104551
Notes: Château de Roissac was built in Roissac, town of Angeac-Champagne, near Cognac in 1770.At this location existed a Gallo-Roman villa and a medieval stately home. Initially under the county Angoumois, earth Roissac was a lordship which was part, with Marville and Gensac a transaction that took place in 1231 between the counts of Angouleme, in the Hugh X of Lusignan and his case Isabelle wife, former queen of England, and Itier II Barbezieux, de Saintonge. The latter renounced the rights to the lordship of Merpins in exchange for those on the three lordships. Geoffroy I de La Rochefoucauld receives these lands legacy of Agnes Barbezieux. They then pass through marriage to Pons Pons, to Mortemer, the La Rochefoucauld, the Lusignan. Joseph de Beauchamp buys and built the present castle in 1770.

How To Get To Château de Roissac (Map):