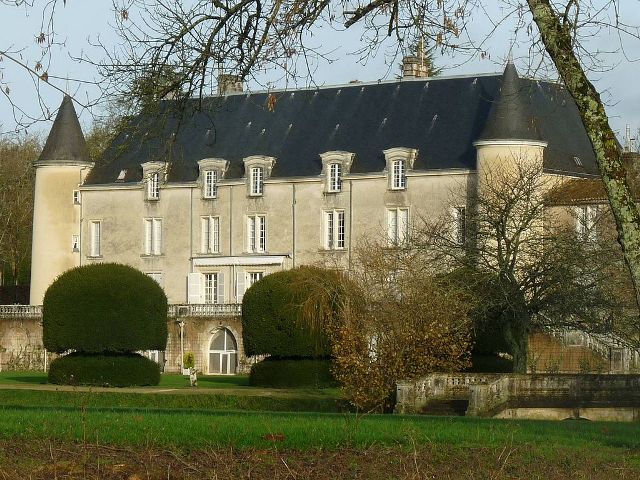 Location: Saint-Brice, in the Charente departement of France (Poitou-Charentes Region).
Built: 18th century.
Condition: In good condition.
Ownership / Access: Privately owned.
ISMH Reference Number: PA00104490
Notes: The Château de Saint-Brice is located in the municipality of Saint-Brice in Charente, on the right bank of the Charente 4 kilometers upstream of Cognac. It was built in the sixteenth century and then rebuilt in the sixteenth century and the nineteenth century. It appears on the general inventory of cultural heritage. This castle is private property, it can not be visited, except during the European Heritage Days, but is visible from the outside and by boat on the river Charente. The oldest known owner of Lousme Jehan, who owned the castle in the 13634 lord commended the Black Prince in 1365. Charles Poussard built the new castle which hosts conferences in 1586 between Catherine de Medici and Henry of Navarre, the future Henri IV. General de Bremond d'Ars undertook major restoration around 1875 The castle belongs since 1901 to the Hennessy family. The home to one floor is framed covered turrets pepper. Its slate roof with two slopes this front, as the first floor, five partially taken windows on the facade and in part at roof level, each with a carved stone pediment. The terrace overlooks the park, down to the Charente and the maze of boxwood cut which is registered historical monument since 1971. The park is a historical garden.