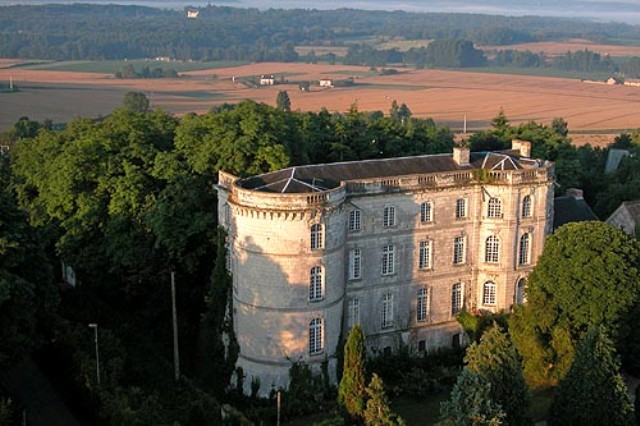 Location: Châtellerault, in the Vienne departement of France (Poitou-Charentes Region).
Built: 12th-18th century.
Condition: In good condition.
Ownership / Access: Privately owned.
ISMH Reference Number: PA00105738
Notes: Château de Targé is a castle located in Chatellerault in the department of Vienne (region Aquitaine-Limousin-Poitou-Charentes). It is a historical monument since 1987. Located 4 km south-east of Chatellerault in Vienna, Castle Targé has terraced gardens on the edge of Vienna. This is an old fortress in 1450 by Jeanne Targé, last name. The fortress was completed by her third husband Claude Norroy. From 1453 to 1760 the castle was successively inhabited by families of Norroy, the Blanchefort and Turpin Crissé. In 1760 it Turpin des Cars, who undertook the reconstruction of the castle which remains today in its unfinished state. The family of the Poëze in Harambure owned the 26 December 1844 until 1899. Harambure of Virginia, daughter of General Alexander Baron Harambure and last name, married René Louis Ambroise La Poëze who will take the name of Harambure for his offspring by Royal Decree of 17 September 1817. Insofar as they were both the owner of the castle Harambure to Yzeures-sur-Creuse and the Castle of Courtils in Barrou, they gave priority to the most important properties. The castle was bequeathed to their second son Gabriel La Poëze Harambure of March 31, 1856 and will be sold by the latter for the renovation of the castle of Yzeures will become the Villa Gabriel. It is nowadays a private property. The village was incorporated in Chatellerault Targé.