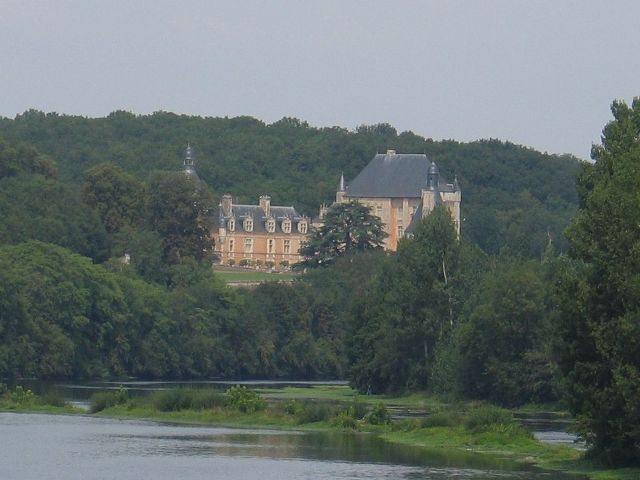 Location: Bonnes, in the Vienne departement of France (Poitou-Charentes Region).
Built: 12th century.
Condition: In good condition.
Ownership / Access: Privately owned.
ISMH Reference Number: PA00105353
Notes: Château de Touffou is a French castle on the edge of Vienna, in the municipality of Bonnes, in the department of Vienne. It was a historical monument in 1923. Castle Touffou has the distinction of having a double dungeon, which according to some, would be the meeting of two towers built separately.Three families of Poitou have succeeded Touffou, the Oger (family) of (1127-1280), the Mauleon 1280-1519) and the Chasteigner from 1519 to 1821) who inherit Touffou by marriage. Some authors [who?] Consider Oger and Mauleon actually refer to the same family, Mauleon is only a nickname which was later adopted as the name of use. The castle has a dominant position on a terrace of the left bank of the Vienne. The original Roman fortress was thoroughly revised at the time of the Renaissance.Il susbsiste only twice carré.Toutefois central tower, it was also remodeled in the fifteenth century. The Renaissance part of the castle is due to Jean Chasteigner (1519-1567), Lord of the Roche-Posay and comrade in arms of Francis I, and his wife Claude Montléon lady Touffou. They build the two towers and the house in the sixteenth century. They also endow the set of a courtyard and terrace. The Chasteigner family own the castle until 1821. The castle is, therefore, substantially redeveloped in the late sixteenth century, with four large towers, moat and drawbridge two. The south bridge dominates caponier.

How To Get To Château de Touffou (Map):