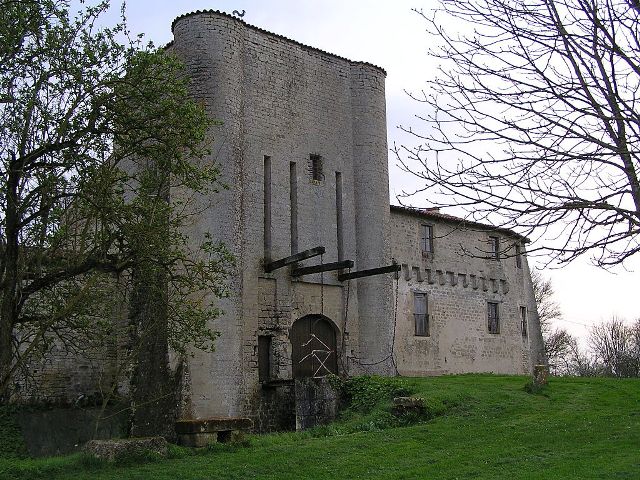 Location: Villeneuve-la-Comtesse, in the Charente-Maritime departement of France (Poitou-Charentes Region).
Built: 12th century.
Condition: In good condition.
Ownership / Access: Privately owned.
ISMH Reference Number: PA00105300
Notes: Château de Villeneuve-la-Comtesse is located south of the village of Villeneuve-la-Comtesse, in Charente-Maritime.The first paper (1235), which show the presence in Villeneuve Countess of a known master reported Exoudun Raoul, youngest son of Hugh VIII of Lusignan and brother of Guy of Lusignan, King of Cyprus and Jerusalem. He married Aélis, Comtesse d'Eu (date of birth unknown), died in 1245 in Villeneuve d'Argenson, later named Villeneuve la Comtesse in memory of Aélis. After the death of Raoul, Aélis confirms, as a Charter, the rights and duties of the inhabitants of Villeneuve. Then, Villeneuve passed to the family of Lusignan to that of Brienne, who were owners of the premises for a hundred years. During the war of "Hundred Years", the French were defeated at the battle of Crecy (1346). By the Treaty of Brétigny (1360), Jean II Le Bon, King of France, presents the English King Edward III, the territories in the great southwestern France. Thus, the manor of Villeneuve became English in 1360, and the property of Edward III Villeneuve transmits to his son, Thomas of Woodstock. 1420, Villeneuve returned to the crown of France. Charles VII gave the manor of Villeneuve, and that of the Jarrie-Audouin in one of the captains of his guard Christin's Chamber, which subsequently rebuilt the castle as we see now. Thereafter, the Chamber's family was Frenchified his name to "House." At the end of the fifteenth century, Mary the wife of Christopher House Laurencie The native family of the borders of Limousin-Dordogne-Charente, which will keep Villeneuve family until 1843. The Chamber's deputy there a Renaissance house, more in line with manners the time, but that will be destroyed by fire in the late eighteenth century.