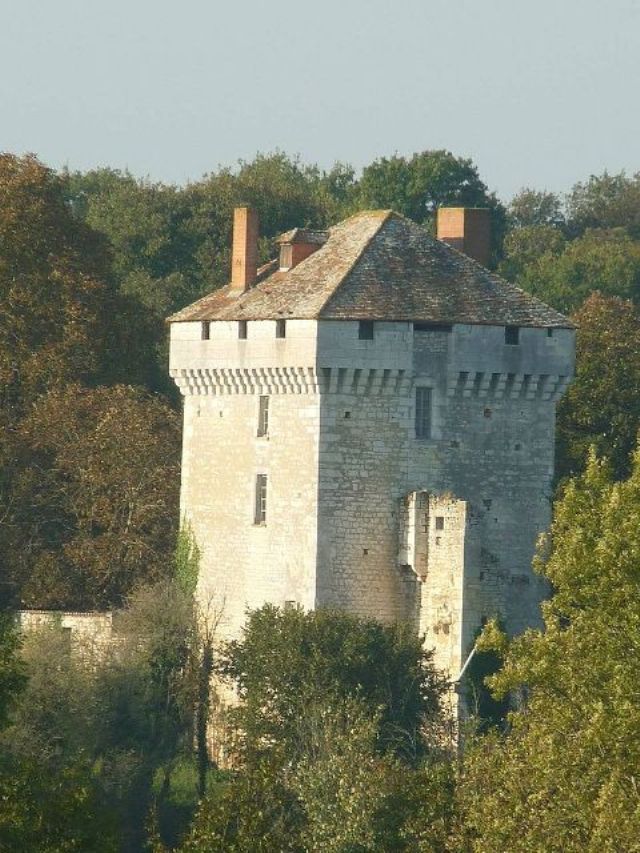 Location: Les Pins, in the Charente departement of France (Poitou-Charentes Region).
Built: 15th-16th century.
Condition: In good condition.
Ownership / Access: Privately owned.
ISMH Reference Number: PA00104455
Notes: Château des Pins is a medieval tower located on the Bonnieure valley in the town of Pines in the Charente. There are only a few archives. A dispute over the right to justice would have opposed the lord of Pines and the Augustinian convent Mortemart. The Viroulaud Marillac family had built the castle located on the border between the English and French possessions during the Hundred Years War. In 1643 François Viroulaud of Marrillac who opposed the king during the Fronde was beheaded and the lordship of Pines was bought in 1626 by René de Devezeau. It is the pastor of St. Mary René Merceron who buys Pins with the Revolution, then married and became mayor of Pines in 1840. The square tower with three floors and is crowned with battlements caractérie by the whiteness of its limestone. It consists of a large room on each floor. The entry included a drawbridge that has disappeared. A corner turret and a small staircase tower that replaces a stair tower collapsed complement constructions3. It is a listed building since 3 April 1958.

How To Get To Château des Pins (Map):