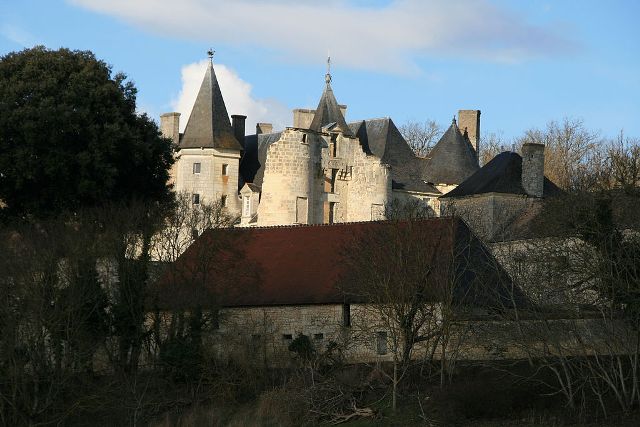 Location: Vouneuil-sur-Vienne, in the Vienne departement of France (Poitou-Charentes Region).
Built: 15th century.
Condition: In good condition.
Ownership / Access: Private property.
ISMH Reference Number: PA00105784
Notes: Château du Fou is a French castle in Vienne department in the municipality of Vouneuil-sur-Vienne. The castle was built by Bishop Yves du Fou, Seneschal of Poitou in late fifteenth century. In 1539, Francis I met Charles Quint. François-Gabriel-Thibaud de La Brousse, Marquis of Verteillac, Baron de la Tour Blanche, husband of Charlotte-Jeanne Bliss Elizabeth (Tiercelin) Appelvoisin of the Maine Roche died there Oct. 26, 1854. He suffered a bombing during the Second World War but has since been restored. The gate, the moats, towers, turret, staircase, vault were classified historic monument by order of 6 February 1953. The rest of the castle including the undeveloped parts has been included in the Inventory of Monuments historic castle in 2010. Du Fou remains the moat, the remains of the entrance postern with its two towers and the staircase tower with its vault.

How To Get To Château du Fou (Map):