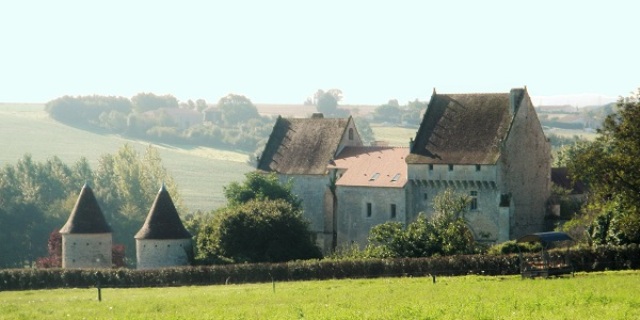 Location: Sainte-Ouenne, in the Deux-Sèvres departement of France (Poitou-Charentes Region).
Built: 15th century.
Condition: In good condition.
Ownership / Access: Privately owned.
ISMH Reference Number: PA00101358
Notes: Château du Gazeau is a historical monument situated in the territory of the municipality of Sainte-Ouenne in the Deux-Sèvres department in France. This is a former coach of Saint-Jacques de Compostela which dates back to the fifteenth century. The castle is built in the fifteenth century by Pierre Aymeret and his wife Jeanne of Gazeau. It remains Aymeret possession of the family for over three hundred years, until 1796. ruin in the early nineteenth century, it is in part demolished, only some buildings remain today. The castle is listed as a historic monument in 1970 and 1995. Partially destroyed by fire August 2, 2013, it has since been renovated. This is a private residence, however, was open to the public during the summer of 2015. Gazeau The castle is located along the Egray Valley. The site consists of various buildings in particular with a chapel and a long gallery of forty meters for the accommodation of pilgrims. At the entrance, the two towers are the remains of a wall.

How To Get To Château du Gazeau (Map):