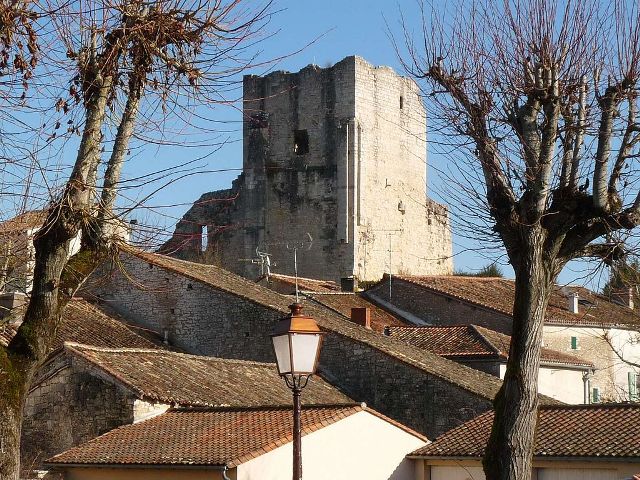 Location: Marthon, in the Charente departement of France (Poitou-Charentes Region).
Built: 10th century.
Condition: Ruins.
Ownership / Access: Private property.
Notes: Donjon de Marthon is located in the town of Marthon in the Charente; the fact remains that the dungeon, formerly Tour du Breuil.The Lordship of Marthon existed since the tenth century. His first known lord is Hugh of Marthon, youngest son born from the marriage of Robert Montberon with a girl Audouin II, Count of Angouleme. The keep is all that remains of the old castle, which was northeast and which can still distinguish the enclosure. Its construction dates from the twelfth or thirteenth century During the Hundred Years War, Marthon lords remained loyal to the king of France. The night of 5 to 6 May 1347, the English surprised the castle and set fire, ravaging all the manor.In the fifteenth century, during the conflict of King Louis XI and his brother Charles, Duke of Guyenne, the royal army found strong support in this castle.The new castle, tucked away and whose construction began in the sixteenth century by Hubert de La Rochefoucauld, Baron Marthon, completed the ruin of the old castle.