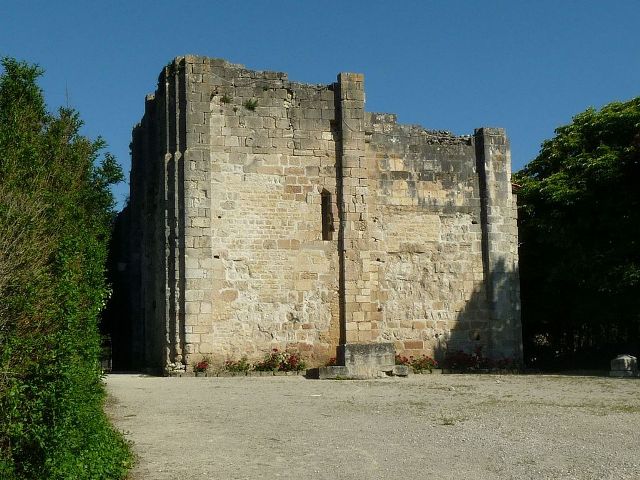 Location: Montignac-Charente, in the Charente departement of France (Poitou-Charentes Region).
Built: 12th-16th century.
Condition: In good condition.
Ownership / Access: Owned by the town.
ISMH Reference Number: PA00104430
Notes: Donjon de Montignac-Charente, located in the town of Montignac-Charente, Charente, remains only the keep. It is built on a terrace overlooking the Charente. Montignac is located at the crossroads of two important Roman roads: the way Agrippa Saintes to Lyon where she crossed the Charente, and via Chaussada Perigueux to Poitiers. There was already an entrenched camp in Montignac in the ninth century, at the time of the Norman invasions. It also marked the beginning of a retrenchment built at that time by the Counts of Angouleme to protect the Norman invasions still called Ditch-au-Comte today and extending to Vibrac. The fortifications of the castle were built and rebuilt several times in the twelfth and thirteenth centuries. It was then a châtellenie honoring the Bishop of Angouleme. Membership is not settled between the viscounts of Marcillac and Taillefer before 1028, when the Count of Angouleme William II is its master and gets the Bishop of Angouleme stronghold and the right to build a castle with stone castrum of Andone3. In the twelfth century it is disputed between Gérard de Blaye, commanding the place, helped by the lords of Saintonge and Poitou and Angouleme Vulgrain II who, supported by the Duke of Aquitaine was able to resume. In 1140 he built the square and keep the enclosure. The round towers date back to the thirteenth century. Montignac going to Lusignan in 1218, when Hugh X of Lusignan inherits his wife Isabelle Taillefer. In 1243, he bequeathed the castle to his son, William de Valence, Earl of Pembroke. In 1350, it was owned by Peter II of Amboise, viscount of Thouars. Then the castle was bought by La Rochefoucauld January 13, 1399. Montignac is erected into a barony in the fifteenth century and preserved by La Rochefoucauld until the Revolution. Towards the end of the seventeenth century they allow people to lean their houses to the walls of the enclosure. The remains of the castle were dismantled in 1840. The chapel dedicated to St. Mary was destroyed between 1940 and 1950. In the chamber, there is the door with harrow with two round towers on top of a cliff, the western part of the enclosure and a round tower. The current fairground corresponds to the lower court. A watercolor of the thirteenth century shows that there were more covered two rounds of pepper. The St. Stephen priory dating from 1030 was demolished in 1960, and its stones were partly used to climb the tower. This forms an imposing mass where the view extends over the Charente valley. The remains were registered historical monuments May 28, 1962.