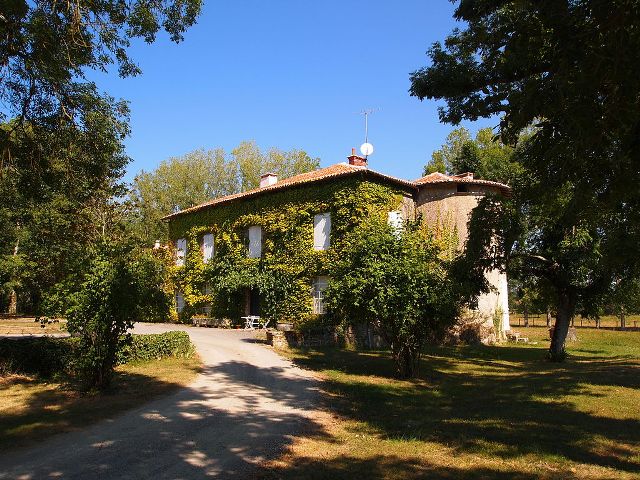 Location: Alloue, in the Charente departement of France (Poitou-Charentes Region).
Built: 15th-18th century.
Condition: In good condition.
Ownership / Access: --
Notes: Logis de la Vergne is located in the town of Alloue, Charente.The first known lords of the area are Guyot. The kitchen fireplace kept the date "1670". Marc Guyot Haunt receives by inheritance the lordship of Vergne in 1679. In 1704, Marc Guyot, husband of Marie de Maire, moved to La Vergne with the rank of lordship. In 1715, the widow of Marc Guyot de la Mothe Villognon sells the noble house and the farm of la Vergne Marc Guyot Lespars. By his marriage in 1812, Françoise Guyot of Ferrodière passed the field to Loyseau family Grandmaison. The date 1843 inscribed on the central keystone of the walkway is the marriage of Charles François de Grandmaison Anne of Pertat. In 1933 the property was sold to René Barbier. His widow, Mrs. Imbert, is obtained by buying at public auction in 1952. In 1961, Maria Casares and his friend André Schlesser (both actors of the troupe NPT Jean Vilar) buy part of each area of ​​Vergne. André and Maria were married in June 1978. On the death of André Schlesser in 1985, his two children from a first marriage, Anne and Gilles, Maria Casares Schlesser legacy to the part of the field that belonged to their father. On the death of Maria Casares Schlesser in 1996, the area - which therefore belongs to him now in full - is bequeathed to the town of Alloue. Since being set up in this place, a cultural project of house of the actress, location and place of author exchanges, actors and directors of theater. The library with all of the home is subject to a registration as a historic monument since December 12, 2002.