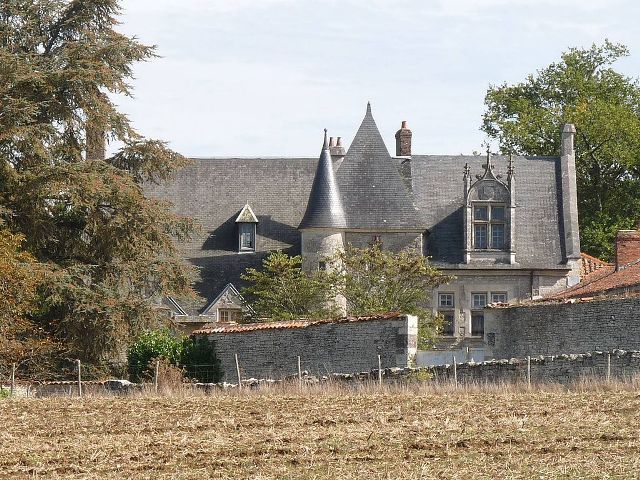 Location: Nanteuil-en-Vallée, in the Charente departement of France (Poitou-Charentes Region).
Built: 16th century.
Condition: In good condition.
Ownership / Access: Privately owned.
Notes: Manoir d'Aizecq is located in Nanteuil-en-Vallée in Charente, in the locality Aizecq 2.5 km west of the town. The first known Lord is Jean Prévost Hall that pays tribute in 1171 to the Abbot of Nanteuil as the land of Aizecq depended on the Abbey of Our Lady of Nanteuil. At the end of the sixteenth century this earth passes Preveraud whose son François-small Gentillhomme of the king's house, is knighted by Louis XIII. Dovecote on foot, is the symbol and mark the right of high justice. Charles de Saluces bought it in 1669. After the Revolution it is returned to Charles de Saluces although he emigrated. The mansion Aizecq consists of a house and a wing joint. This noble house on two levels and an attic floor has in its center a square tower entrance flanked by a turret outstanding. The buildings have been redesigned in the nineteenth century with two arches added on one side of the facade. Fortunately a dormer eardrum in a semicircle, mullioned windows and a front door decorated with a gable accolade that are characteristic of the sixteenth century have been preserved. The other façade kept a watch tower with conical roof at its southern end. The pigeon whose interior has retained its bearers is registered historical monument since 30 December 2002.