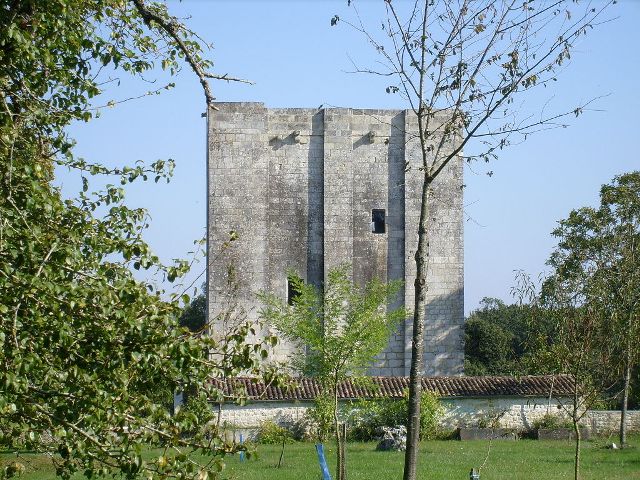 Location: Saint-Sulpice-d'Arnoult, in the Charente-Maritime departement of France (Poitou-Charentes Region).
Built: 12th century.
Condition: Ruins.
Ownership / Access: Privately owned.
ISMH Reference Number: PA00105242
Notes: Tour de l'Isleau in Saint-Sulpice-d'Arnoult is located not far from the road to Corme-Royal.This feudal relic dating from the twelfth century is the oldest military buildings in the area. Some attribute the building of the dungeon Isleau on a small hill overlooking the marsh, to Henry III Plantagenet. The first lord known with certainty appears in a confession made in 1368: it is Pont de Vivonne Chevalier, "witnesse of truth" under the Envelope Sealers its "Chastellerie of Lileau near Pontlabay". During the seventeenth and eighteenth centuries, the estate became the property of the barons of the Thatch. In 1521, John III Isle of Cave inherits the Isleau his uncle Guy Estuer. His son, François Isle of Matassière, receives the 1557 and pass it to her son, Daniel Isle Forgette in 1578.The heraldic sites noted Prevost, Lord of the Isleau, Parish of Sainte-Gemme, election of Saintes.In the nineteenth century, the keep, farmers' property, was abandoned and overgrown with brambles and weeds. Its restoration was undertaken by private owners since 1974.

How To Get To Tour de l'Isleau (Map):