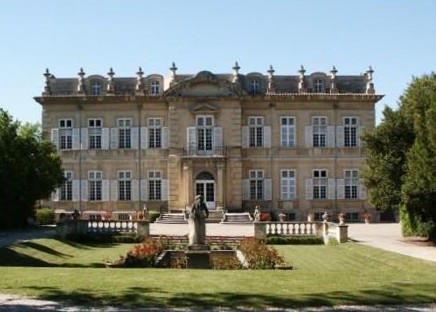 Location: Barbentane, in the Bouches-du-Rhône departement of France (Provence-Alpes-Cote-d-Azur Region).
Built: 17th-18th century.
Condition: In good condition.
Ownership / Access: Privately owned.
ISMH Reference Number: PA00081200
Notes: Château de Barbentane also called Le Petit Trianon of Provence or the most Italian of Provence châteaux of the Renaissance is located in the municipality of Barbentane (Bouches du Rhône).This castle was built in 1674 by architect Louis-François Royers of Valfenière Paul Francis Puget Barbentane brought to him. The castle is remodeled by Paul Francis II, son of the former in 1741 (flat arches and loaders that make his glory). The interior is embellished in the eighteenth century by Balthazar Puget Barbentane, son of Paul François II, Louis XV of France's ambassador to Tuscany, at the age of 20 years. It is Chamberlain of his Serene Highness Monseigneur the Duke of Orleans, Minister Plenipotentiary of the King with the Grand Duke of Tuscany, Florence (1768-1788). He was saved during the Revolution that Paul François Hilarion Puget, Marquis of Barbentane, former officer of the king, agreed to become general of the republic. By its construction, it is the origin of the first outskirts of the village. The porch of the southern facade, it offers a remarkable view of the Tower of Barbentane, the village and the Montagnette. The castle and its grounds and buildings of the farmyard and sculptures and decorations of the park were listed monuments 9 September 1949.1 It is possible to visit since 2014.

How To Get To Château de Barbentane (Map):