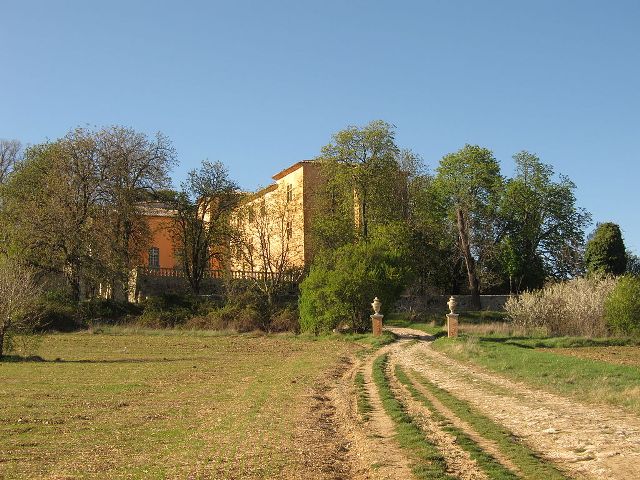 Location: Sigonce, in the Alpes-de-Haute-Provence departement of France (Provence-Alpes-Cote-d-Azur Region).
Built: 17th-18th century.
Condition: In good condition.
Ownership / Access: Privately owned.
ISMH Reference Number: PA00080512
Notes: Château de Bel Air de Sigonce is located on the territory of the French town of Sigonce, in the department of Alpes-de-Haute-Provence and the region Provence-Alpes-Côte d'Azur.Located 500 meters northwest of the village, in a hillside facing south, set in a green giant chestnut eighteenth century, Bel Air the castle, as the name suggests, look great and haughty mine. This beautiful house was built in the sixteenth century to the eighteenth century, probably by Du Bousquet, coseigneurs Sigonce on medieval past remains: Two angled wings are connected by a dungeon and each extended by a tower, the northern façade is crowned with an arc, the Genoese all facades are 4 rows of tiles privilege of senior lords. Inside, a monumental staircase has a ceiling decorated with plasterwork, and the lintels of the rooms are decorated with paintings of the eighteenth century. So we find in the castle stairs and into the hall of plasterwork in the shape of birds, animals with 4 legs, head and arms that we suspect to be those of Du Bousquet who owned unduly, for many years, the lordship of Sigonce. Lives now in Bel-Air mansion, now the village. There were also many chimneys in Bel Air. Many have unfortunately disappeared, witnesses numerous cutaways that remain. One of them seventeenth century is still in very good condition with sculptures of stylized acanthus. The building is registered as historical monuments in 1990.