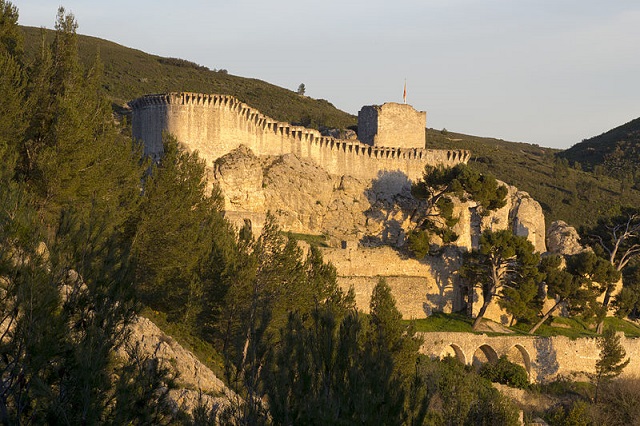 Location: Boulbon, in the Vaucluse departement of France (Provence-Alpes-Cote-d-Azur Region).
Built: 11th century.
Condition: Ruined.
Ownership / Access: Private.
Notes: The castle of Boulbon is a ruin of the feudal castle built from the twelfth century, located at 1-5 Rue du Fort in Boulbon, Bouches-du-Rhône.Located on a strategic commercial and strategic axis, overlooking the Rhone valley, bordering the county of Provence and the Kingdom of France and crossing major roads at the time, the castle of Boulbon was considered, from its construction, As a sentinel of Provence. The oldest part of the castle is undoubtedly the keep, the central rectangular tower that dates back to the eleventh century. The curtain wall, surrounding the keep and perfectly embracing the rock, dates from the 13th century, while the machicolations seem later (fourteenth century). The latter, decorated with trilobate motifs, are similar to those which crown the royal castle of Tarascon. It was only at the end of the fourteenth century that the lords' house and the large terrace on the west side were built. It was in the seventeenth century that the castle saw the development of its terraced gardens as well as the road that leads to the north gate. Gaston de Raousset-Boulbon, owner of the castle in the nineteenth century The castle of Boulbon belonged to many different owners since its construction. Raymond de Turenne and King Rene are examples of this in the fifteenth century. In 1608, the lordship of Boulbon was erected in county. Then, in 1784, it passed to the family of Raousset-Boulbon which will preserve it until the nineteenth century. From the beginning of the nineteenth century, the castle itself was no longer habitable. Gaston de Raousset-Boulbon, after squandering the family fortune, tries to settle in French Algeria, then in the course of colonization, then is a key protagonist of the founding of the Republic of Sonora in Mexico in the years 1850, before To die there shot. The last Earl of Boulbon, Gaston de Raousset, died at Boulbon without direct descendants in 1956. The castle belongs to the Bonaparte-Wyse family.

How To Get To Château de Boulbon(Map):