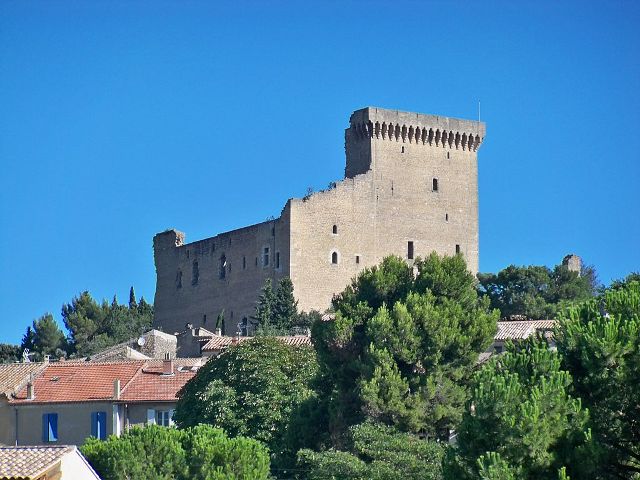 Location: Châteauneuf-du-Pape, in the Vaucluse departement of France (Provence-Alpes-Cote-d-Azur Region).
Built: 1317-1333.
Condition: Ruins.
Ownership / Access: Owned by the municipality.
ISMH Reference Number: PA00082028
Notes: Château de Châteauneuf-du-Pape dominates the village and its vineyards, for nearly 800 years. Its link with Avignon Papacy strongly marked Châteauneuf-du-Pape, and viticulture in the region.He had to be a Roman castrum probably destroyed during the great invasions. This appears under the name of Castellum Leri in a charter of 913. It is signed by Louis the Blind that gives this place to Fulk, bishop of Avignon. In 1077, his successor Rostaing, inféoda this fief Peter to Albaron who built a dungeon. Throughout the Middle Ages, the old castle was a lifeguard and tolls on the Rhone which passed different related families of Albaron.Castle became the Hers, after its enlargement to the twelfth century, it was renovated once during the thirteenth century. Some historians have set up the Templars at the end of the twelfth century. This legend has been demolished by the historians of the twentieth century.The first mention of Castro Novo (new fortified village), who gave the name of Châteauneuf, first appeared in 1094. This castrum on the hill, was replaced by a new building of the Count of Toulouse, the suzerain County of Provence. This 1146 building was identified in 1283 as an act of the old tower. It is this tenement which fell to Godefredus Lauger, bishop of Avignon, and his successors by a charter dated 1157 in which the Emperor Frederick Barbarossa indicated the presence of vines.