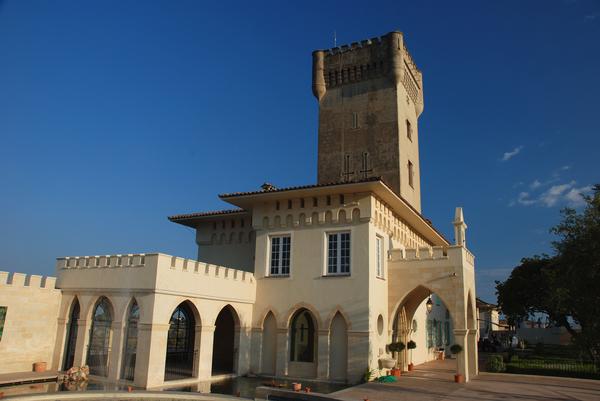 Location: Nice, in the Alpes-Maritimes departement of France (Provence-Alpes-Cote-d-Azur Region).
Built: 1906.
Condition: In good condition.
Ownership / Access: Privately owned.
Notes: Château de Crémat is a castle built in Nice in the Alpes-Maritimes department in 1906. It is a vineyard that also owned a vineyard and a reception area.The history of the Castle Crémat dates back to the Roman Empire at that time a legion settled on the place called "Li Plana di Mari" which was used for the cultivation of olive trees and vines. Later, in 1906, Antoine Mari, wine merchant, built the castle on the underground galleries of "Li Plana di Mari" used in Roman times for the oil and wine, they become the castle cellars. He revived the vineyard belletan after the devastation caused by phylloxera. In 1923 the estate was acquired by an American millionaire, a shareholder of a large American company Railway: Irène Bretz. The latter undertook development works under the direction of Dalmas architectural firm, who worked in the construction of large hotels of the Belle Epoque with the Carlton in Cannes. These changes, both internal and external, do not affect the general appearance of the castle preserved its proud dungeon. Ms. Bretz, owner of the legendary Negresco, in Nice received everything the French Riviera had celebrity and one of the assiduous hosts of these sumptuous evening was none other than Coco Chanel whose style dominated fashion; the record reveals that it would be inspired by the original castle Crémat, the two intertwined C, to create the acronym of its prestigious fashion house.In 1941, Pierre Thomé, the castle owner and president of the Union of winemakers obtained the AOC for wine of Bellet. In 1980 Charles Bagnis buys Crémat. The vineyards and the wine of Bellet in general are at their peak. Unfortunately it will separate from the castle in the mid-1990s. After passing into the hands of Pierre Thomé, president of the Union of winemakers and Bagnis family after World War II, the area becomes somewhat neglected in 1995, the property of an advertising Nice, Jean-Pierre Pisoni; intended to accommodate seminars, meetings, congresses and prestigious receptions since the castle is the subject of a luxurious renovation. While perpetuating the famous wine place Pisoni M maintains the motto of the house "we do not want to be the biggest, we want to be the best" In 2001 it is a wine of Bellet lovers who bought the castle: the Dutchman Cornelis Kamerbeek. His goal: find the historical area of ​​25 ha. For now, this program is realized with the expansion and modernization of cellars, installing new sales and tasting rooms and a special attention to the vineyard.

How To Get To Château de Crémat (Map):