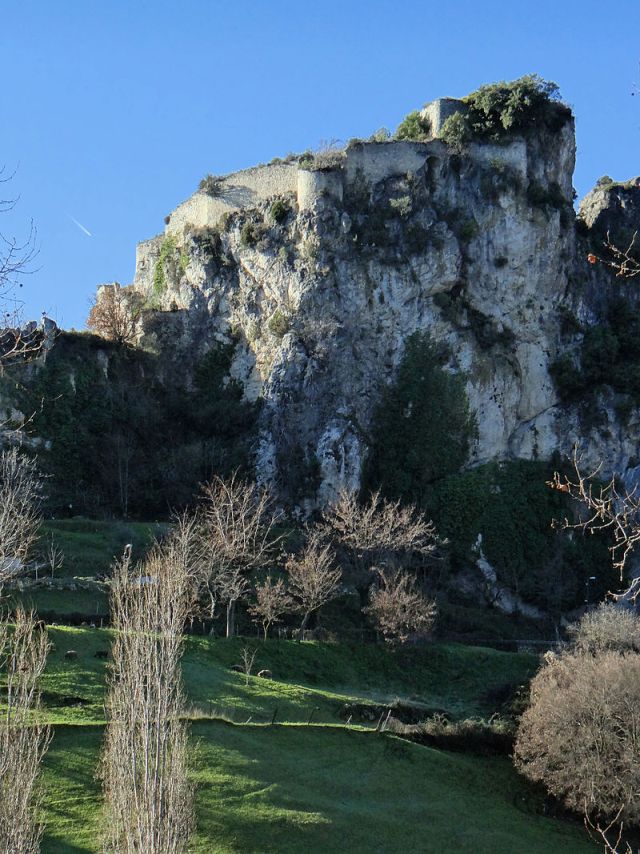 Location: Gilette, in the Alpes-Maritimes departement of France (Provence-Alpes-Cote-d-Azur Region).
Built: 13th century.
Condition: Ruins.
Ownership / Access: Owned by the municipality.
ISMH Reference Number: PA00080724
Notes: Château de Gilette is a castle of the thirteenth century Gilette built by a branch of the family of Ventimiglia. The castle is listed as a historic monument by decree of June 28, 1933.Gilette is mentioned for the first time under the name Gileta, in the cartulary of the abbey of Saint-Pons in 1028. The feud was then a possession of Thorame-Castellane. Then, with a Benedictine priory of the abbey of Saint-Victor de Marseille. Members of a family named Gilette are quoted from the eleventh century. Castle Aiguille should at least go back to the thirteenth century, but it may be older. It stands on a rocky peak overlooking the village.In 1526, the son of Honoré I Grimaldi de Breuil, Jean-Baptiste Grimaldi, Lord of Ascros, and Rene Grimaldi, Lord of Massoins, pledged to deliver the County of Nice to the King of France. Honoré Laugier, Lord of Gilette and Ferres, denounced them. He then besieged by the Grimaldi castle in Gilette they réussisent to take after the leak of Honoré Laugier, in August. Grimaldi condemned by the Count of Savoy, they were in turn besieged for two months in the castle of Gilette and must flee to France. Gilette is occupied by French troops between 1536 and 1544. Then Gilette belonged to families and Orserio Caïs The castle was enlarged in the sixteenth century to occupy all available space. The village was then developed on the neck, at the current location. The castle was in the Battle of Gilette of 18 and 19 October 1793.