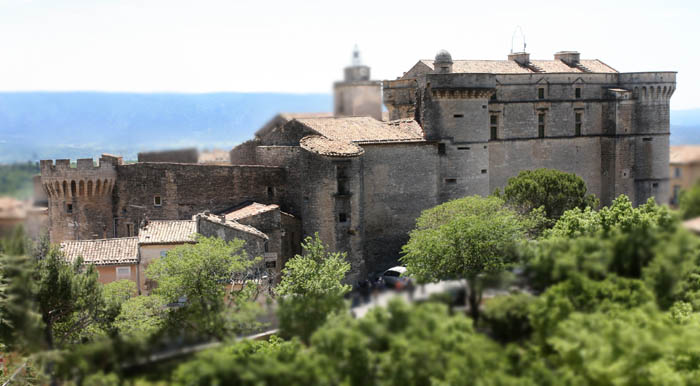 Location: Gordes, in the Vaucluse departement of France (Provence-Alpes-Cote-d-Azur Region).
Built: 11th century.
Condition: In good condition.
Ownership / Access: Owned by the municipality.
ISMH Reference Number: PA00082042
Notes: Château de Gordes is located in the heart of the village, itself built on a rocky outcrop at +/- 300 meters. It is a large building quadrilateral corner towers, Renaissance period. A walkway bordered by the roofs and the view stretches far over the Venaissin County and all of Apt Valley. Gordes is part of the Regional Park of the Luberon, in the Vaucluse department, Provence-Alpes-Côte d'Azur.For a thousand years, the castle crowns the village of Gordes. Guillaume d'Agoult, one of the forefathers of this powerful feudal family who covered fortifications all the surrounding villages, the mention in 1031. His successors strengthen to make in 1123 a castrum nobile, the only well known among the many neighboring castles. In the middle of the fourteenth century, as elsewhere in Provence and Comtat Venaissin, increases the primitive dungeon for better defense against incursions of Raymond de Turenne, Arnault of Servole, and looting of Large Companies. Besieged in vain during the Wars of Religion, it was the stronghold of the Marquis de Simiane, then the Dukes of Soubise, and in the eighteenth century the princes of Conde. The medieval castle, built up spur of the village, was rebuilt between 1525 and 1541 in the Renaissance style by Bertrand Rambaud Simiane. It has since then two faces: a northern facade still castle and a very Southern Renaissance facade.During the seventeenth and eighteenth centuries, the castle seems to have been no significant change, its distant owners merely collect the revenues of the lordship. Towards 1789, the revolutionaries seized the castle, but do not destroy it. The castle was once part of the gordienne life with the opening of a coffee ground street, visible in some photos of the early twentieth century but since deleted (walled openings). The castle was a historical monument July 4, 1931 and its round tower was recorded October 28, 1949. After hosting from June 1970 to March 1996 a museum dedicated to the works of Victor Vasarely, it now houses, in addition to the tourist office, an art museum devoted to the works of Pol Mara, Belgian artist. The town has long been on the first floor of the castle, then, to benefit from more space, transferred to the former hotel of Simiane.