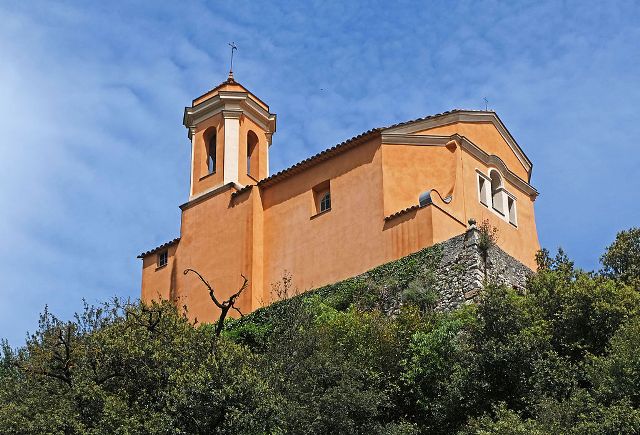 Location: Saint-André, in the Alpes-Maritimes departement of France (Provence-Alpes-Cote-d-Azur Region).
Built: 18th century.
Condition: In good condition.
Ownership / Access: Owned by an association.
ISMH Reference Number: PA00080830
Notes: Château de Saint-André is a castle located in Saint-André-de-la-Roche. The castle is listed as historical monuments by order of 10 June 1975 and filed on the same date.St. Andrew is mentioned for the first time on December 9 999, in the will of Odile who gave a property located at the villa della Rocca in the abbey of Saint-Pons Nice. She had been married once with Miron then, before 1010, with Laugier, Lord of Vence. The fief belonged to Raybaud Chabaud, Tourettes lord, in 1441. In 1555, Melchior Michelotti married the daughter of John III Chabaud and then acquired three quarters of the fief. In 1606, Pierre Thaon, son of Philippe Thaon (died 1635), wife Camilla Michelotti (born c. 1580), daughter of Melchiorre Michelotti (born c. 1547) and Brigitte Doria. She was the heiress of the fief of Revel, consisting of part of Tourettes district, Tourrette (where remains of the castle Revel) near Nice, and Saint-Andre, Saint-André-de- the rock. The castle is mentioned for the first time in 1624. The document mentions a canon of goods donation Jules Thaon his nephew Charles Antoine Thaon provided they can live in the castle. The transformation of the strong house villa is probably date from this donation. The castle of Saint-André has three parts:east, an old fortress, as shown by the shooting embrasures in the basement. The castle was to guard the gorges of Spangle to its confluence with the Spangle St. Andrew. It was transformed into a villa when it lost its military interest in the sixteenth century. The rich baroque decoration slice ceilings with the sobriety of the facades. Found the date 1775 on one of the lounge sets. The frescoes were sometimes attributed to Galliari brothers, but without proof. Others mentioned a speech of Abraham Van Loo, without more evidence. west, a Baroque chapel whose style resembles that of Marc'Antonio Grigho who came to work in Monaco in 1665 the convent and the chapel of the Visitation, then in Nice in 1680, between the two buildings and linking, a long loggia with blind arcades, built after 1725, decorated in stucco. The family Thaon Revel chose to follow the Savoy. These are the most important members are established in Turin and the castle of Saint-André was a place of reception when they came into the County of Nice. In Germinal Year VI, the castle was acquired by a surveyor Nice. But in 1812 he was reassigned to the family Thaon Revel and St. Andrew. The Thaon Revel settled permanently in Turin after the annexation of the County of Nice to France. They sold their castle in 1862 at the St. Paul hospital. The castle will then know several uses before being taken over by the association of Emmaus Companions of Saint-André-de-la-Roche.