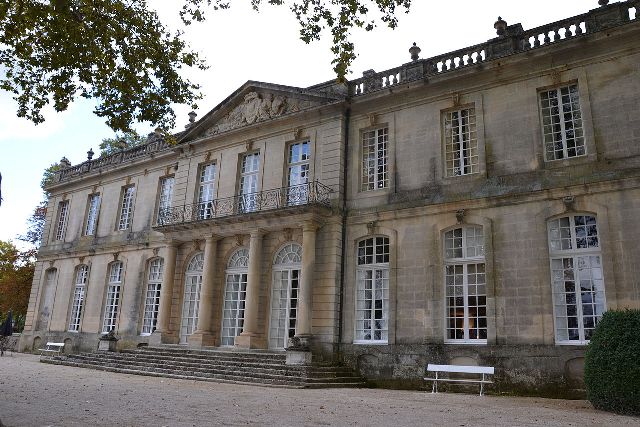 Location: Mane, in the Alpes-de-Haute-Provence departement of France (Provence-Alpes-Cote-d-Azur Region).
Built: 18th century.
Condition: In good condition.
Ownership / Access: Private property.
ISMH Reference Number: PA00080414
Notes: Château de Sauvan also sometimes called the "Petit Trianon de Provence" is located in the town of Mane, near Forcalquier in the Alpes-de-Haute-Provence in France.Private property, its common, the park, and the whole castle are listed or registered historical monuments since 1957. Purest classical style, quite unique in Provence by the purity and harmony of its architecture, it owes its construction (1719-1720) Joseph Palamède de Forbin-Janson and his plans to John the Baptist Frankish, Avignon architect. Simple rectangular building with a floor, a central body is advanced on its facade, with a balcony supported by four columns and a triangular pediment. Its roof is hidden by a balustrade. The Revolution will not occasioned great damage on the site except the pediment of the main façade, which was hammered. It was sold in 1810 by Charles Theodore Palamède de Forbin-Janson to Father Henri-Anne Solliers. The castle then passed to his niece, Marie-Rose Chambaud Cochet, in 1902 wife of Count Paul Servan Bezaure. Finally, the property is, since 1981, in the hands of Jean-Claude and brothers Robert Allibert. The park has been awarded the "Outstanding Garden" in 2005. Pierre Magnan fictionalized history of the castle in Chronicle of a haunted castle (Denoël, 2008). In 1988, Georges Lautner has turned Sauvan The Murdered House with Patrick Bruel and Anne Brochet, from the novel by Pierre Magnan.

How To Get To Château de Sauvan (Map):