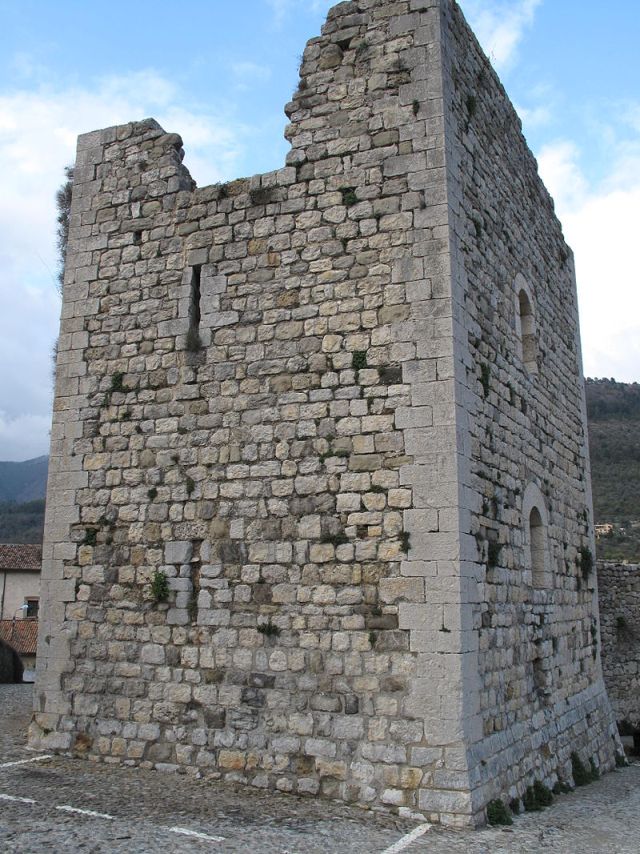 Location: Sospel, in the Alpes-Maritimes departement of France (Provence-Alpes-Cote-d-Azur Region).
Built: 13th century.
Condition: Ruins.
Ownership / Access: Privately owned.
ISMH Reference Number: PA00080863
Notes: Château de Sospel is a castle of the thirteenth century whose remains stand in the town of Sospel in the Alpes-Maritimes and the region Provence-Alpes-Côte d'Azur. The remains of the castle are the subject of a registration as a historic monument by decree of June 6, 1933.The habitat was initially developed on a hill between the Merlanson Bévéra and then grew to Bévéra. Sospel was surrounded by a wall from around 1230. Sospel then part of Ventimiglia County. Count William IV withstood a siege by the Genoese Ventimiglia from 1219. He is rescued by Raimond Bérenger V in 1220. The Count of Ventimiglia Ventimiglia had to abandon that is taken by the Genoese September 8, 1222. The city will be linked to the commitments of the Ventimiglia vis-à-vis the Republic of Genoa and then with the counts of Provence. In 1232, the city had to engage with the Podesta Ventimiglia to demolish its walls when the Republic of Genoa would demand.William VI, Count of Ventimiglia, son of William IV, deals with Charles I for him, his brothers and his children, 19 January 1257. He sold his property in the county of Ventimiglia and the valley of Lantosque against property in Provence up to 5000 soil in annual revenue. On March 28, 1258 signed the Treaty of Lucéram by which Boniface and George Counts of Ventimiglia sell Breil, Saorge and other strongholds to the Count of Provence. The count of Ventimiglia is then placed under the suzerainty of the Count of Provence. William Peter I of Ventimiglia, son of William IV and brother of William VI, is lord of Tende and The Brig. In 1307, an act of Charles II of Anjou, Count of Provence, dated January 26, 1307, fixed the administrative division of Provence. It indicates that the sénéchalat includes vigueries Marseille, Hyères, Draguignan, Grasse, Nice, the bailiwicks of Toulon, Saint-Maximin, Brignoles, Puget-Théniers and County of Ventimiglia. This bailiwick or viguerie appointed Vicaria comitatus Vintimilii and vallis Lantusce. It includes the towns of Saorge, Breil, Pigna, La Roquette, Peille, Lucéram, Belvedere, The Bolène, Lantosque Utelle, Roquebillière, St. Martin, La Tour, the valley of Bloure with Saint-Dalmas, La Roche and Bollène. The headquarters of the magistrature is in Sospel which will meet the county parliament. Representatives of the magistrature have repeatedly protested against the difficulty of gathering this parliament. This right is renewed by the counts of Provence in 1312, 1347 and 13823. In 1333, this speaker is modest because it is declared by the discopertum clavaire. The castle is restored in 1358 by the count's court. In 1376, the Count of Provence affects castle defense Castillon Sospel. In 1383, the walls are raised and developed. This is the time of the confrontation between two branches of the family of Anjou to take the county of Provence after the death of Queen Jeanne. This speaker is still in good condition in 1556.