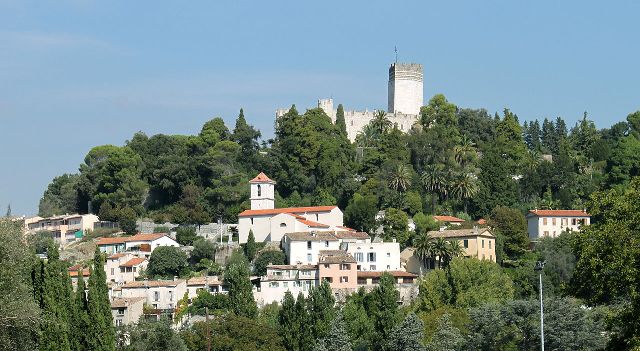 Location: Villeneuve-Loubet, in the Alpes-Maritimes departement of France (Provence-Alpes-Cote-d-Azur Region).
Built: 1234.
Condition: In good condition.
Ownership / Access: --.
ISMH Reference Number: PA00080925
Notes: Château de Villeneuve-Loubet is a castle built in the thirteenth century by Romée de Villeneuve, located on the eponymous French commune in the Alpes-Maritimes and the region Provence-Alpes-Côte d'Azur. Villeneuve Castle and its park are the subject of a registration as a historic monument since December 30, 1986. The park, the ramparts and the courtyard can be visited with Villeneuve-Loubet.visite the Tourist Office fortress.In 1191, the Republic of Genoa was granted the city and the territory of Monaco by Henry VI. The Republic was then the ambition to expand its possessions along the entire coastline to the Var. It will spark a rebellion against the counts of Provence in the city of Nice with the support of a few aristocrats. 6 July 1215, the Nice aristocratic party took control of Nice and proclaimed the independence of the city compared to the Count of Provence. In 1220, the Count of Provence Ramon Berenguer IV or V married Beatrice, daughter of Count I. Thomas. The city of Nice has entered into an alliance with the towns of Grasse and Draguignan and signed an agreement with the Republic of Pisa in November 1228. At that time the army of the Count of Provence of controlled Romée Villeneuve has brought along the Var. The party opposed to the Nice independence negotiated with Romée Villeneuve capitulation of the city with confirmation of the terms of the treaty passed in 1176 with Alfonso I of Provence, King of Aragon, Count of Provence and the Count of Barcelona. This agreement is entered into a deed November 9, 1229 before the notary Guillaume Tery Nice.In 1230, the Count of Provence Raimond Bérenger V has made himself master of the territory of Vence with the help of Romée de Villeneuve, provost and baile de Provence. Between 1231 and 1234, Romée de Villeneuve decided to build on top of the hill Gaudelet his castle and create the same time the village of Villeneuve on land given to him by Raimond Bérenger V after the resumption of Nice. The castle was probably built on top of an ancient castrum dating from the eleventh century. On the death of Raymond Berenger V, it is the guardian of Provence Beatrice until she married Charles I of Anjou. In 1251, the castle was sold to fill Romée debt Villeneuve and becomes a Count's fief. Villeneuve House remained lord of Vence. Yolande of Aragon gave the castle in 1422 to Antoine de Villeneuve, lord of Flayosc.In 1742 the manor and castle come by succession of Henry Thomas, Baron de la Garde, the Marquis de Villeneuve, son of Augustus Thomas, in the Mark-Tripoli-family Panisse Passis. The feud became a marquisate. The castle was confiscated during the Revolution, and was nearly demolished, but was saved thanks to its transformation hospital for the wounded of the army of Italy. After the revolutionary turmoil in 1802, the castle is again Henri property Panisse-Passis (1736-1802) who had to repair it. His younger son, Peter Leander Panisse-Passis (1770-1842), a peer of France, there is improvement work. It was badly shaken by an earthquake in 1887. Henri-Henri de Panisse-Passis (1837-1911) then undertook a general restoration. The castle bears traces of the 1944 bombings.

How To Get To Château de Villeneuve-Loubet (Map):