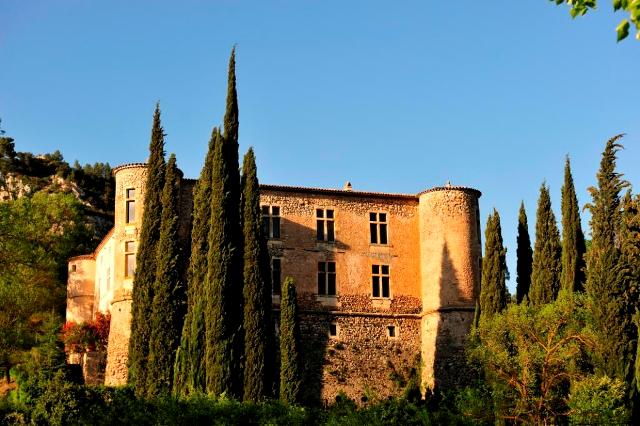 Location: Vins-sur-Caramy, in the Var departement of France (Provence-Alpes-Cote-d-Azur Region).
Built: 16th-19th century.
Condition: In good condition.
Ownership / Access: Privately owned.
ISMH Reference Number: PA00081778
Notes: Château de Vins is located in the municipality of Vins-sur-Caramy in the Var department.This castle belonged to the family of the Counts of Provence before passing by marriage to the families of Brici then Garda Hubert, the future "Generalissimo" of ligueuses armies of Provence and son of Honorat Gaspard Guard, President of the Parliament of Aix there was born in 1539. the family built the castle in the early sixteenth century to make it his principal residence. Wines Guard Hubert was head of the league in Provence. His son Francis gets the erection of marquis by letters in Wines of the Month of March 1641 in Sacramento the following April. His grand-son Jean, Marquis Wine, lieutenant general of the king's armies, lieutenant captain of the first company of musketeers, died in 1731 without issue Ladvocat Charlotte, after the Paris dress, sister of Pomponio. Luke inherits the count. Witnessed a period of transition from the medieval fortress and Renaissance refinement, the castle is of particular character. Abandoned for several decades, the monument was saved in ruins at the initiative of a private owner who undertakes regularly since 1960, works. Castle Wines was listed by order of 31 May 1965, in its entirety, on the additional inventory of historic monuments.An "association for safeguarding the remains of the castle" was created July 27, 1982, which will replace the "Saving Association and Cultural Animation of wine castle". Since 1983, when the site was still in its infancy, in addition to tours, the castle hosts exhibitions, a summer academy of music and concerts class "yards". The castle has indeed to host all audiences, from guest rooms.

How To Get To Château de Vins (Map):