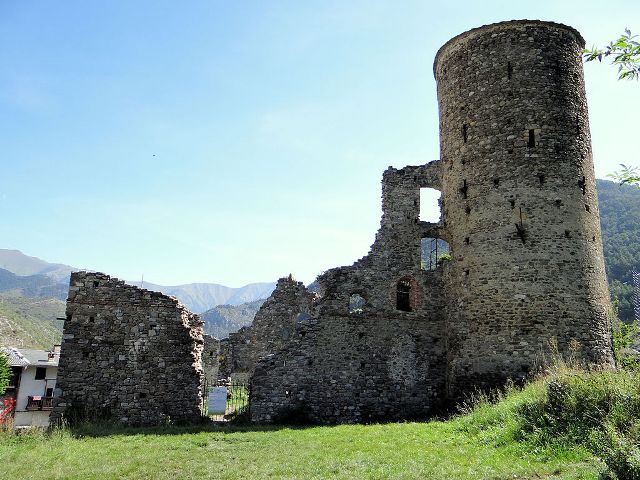 Location: Brigue (La), in the Alpes-Maritimes departement of France (Provence-Alpes-Cote-d-Azur Region).
Built: 12th-14th century.
Condition: Ruins.
Ownership / Access: Owned by the municipality.
ISMH Reference Number: PA00080683
Notes: Château des Seigneurs de la Brigue or Lascaris castle is a castle of the fourteenth century La Brig built by a branch of the family of Ventimiglia. The castle is listed as historical monuments by order of 2 February 1949.Brig was part of the county of Ventimiglia belonging to the house of Ventimiglia. The Ventimiglia then controlled the valleys of the Roya, Bévéra, the Nervia and the top of the Vesubie Valley after the end of the occupation by the Saracens. The county was first managed by the Ventimiglia family ownership. After receiving the recognition of their status by the Count of Ventimiglia Gui Guerra, in 1157, his brother Otto II attempted to impose his rights. The people of Ventimiglia rebelled against him in 1185. In 1157, Count Gui Guerra gave to the Republic of Genoa squares of Breil, Saorge and Tende and recognizes vassal of the republic to these places. Genoa will turn against the town of Ventimiglia will place it sounds control by an Act of June 1251. To resist this attempt to Genoa, the towns of Tende, La Brigue, Saorge Breil and decided to unite in only recognizing the rights of the Ventimiglia. Faced with Genoa, a family member of Ventimiglia decided to recognize the suzerainty of the counts of Provence. February 23, 1258, William II gives the Count of Provence Charles I, the rights held on Gorbio, The Brig, Tenda, Castellar, St. Agnes, Castillon, the valley of Lantosque, under promise of exchange a land. The following year, Boniface Ventimiglia gives the Count of Provence rights on Breil, Saorge and Castle Sospel.Despite these agreements, Tende and The Brig will remain under the control of the family Ventimiglia as found in 1262 a limit of agreement established territories between the Count of Provence and the Republic of Genoa. The branch of Ventimiglia-Tenda will take the name of Lascaris after the wedding of William Peter I of Ventimiglia (1257-1282), Lord of the Tenda and Brig (1253-1283) with Eudoxia Lascaris, July 28, 1261. On the death of Count Guillaume-Pierre II, Count of Tende, in 1369, his property is divided among his children, according to his will. Tenda The Brig located in two different batches, there has been creation of two branches of Lascaris, the lords of Tenda and the Lords of The Brig. It is this younger branch of the Lascaris who built the castle between 1376 and 1379.When, in 1388, Count of Savoy Amadeus VII traveled to Nice, he promised his new subjects to fight against banditry lords of Tende and The Brig bothers communications between Nice and Piedmont. December 22, 1406, John, Peter and Rainier Lascaris, coseigneurs of The Brig render homage to the Count of Savoy Amadeus VIII to George Drua, judge of Nice, Breil. On 3 July 1426, the heirs of the poet Louis Lascaris, son of Pierre-Guillaume II, sold to the Count of Savoy their inheritance, namely, the third of The Brig and the sixth of Limone. In 1543 was added to the main building of small bastions at the corners. July 20, 1564, an earthquake with its epicenter in the Vesubie valley partially destroyed the castle.The castle withstood a Genoese attack in 1625. The Heritage and Traditions Association Brigasques found in the archives of the castle a sketch drawn in 1656 by Morello captain for the Duke of Savoy. During the Revolution, the fighting took place in the Upper Roya from 1793. The General Rusca helped Massena dislodges Sardis The Brig 28 April 1794. The castle was burned by the French troops. The mayor of the Brig undertakes the castle clearance work in 1993. The Association "Heritage and Traditions Brigasques" has engaged in this cleaning operation and consolidation of the castle from 1995.