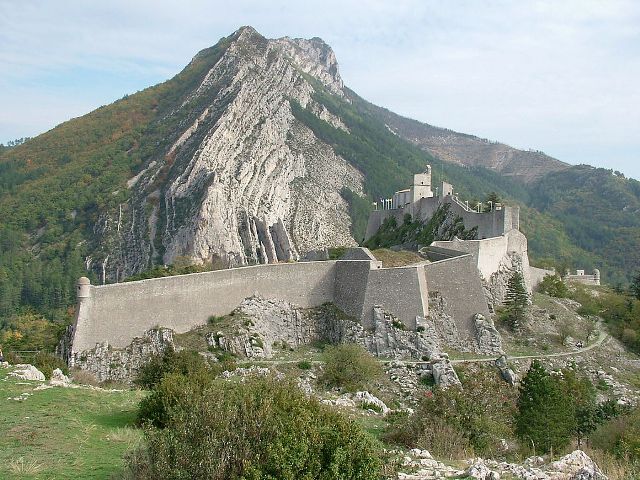 Location: Sisteron, in the Alpes-de-Haute-Provence departement of France (Provence-Alpes-Cote-d-Azur Region).
Built: 14th-16th century.
Condition: Ruins.
Ownership / Access: --
Notes: At 500 meters, the Citadelle de Sisteron overlooks the city of Sisteron - located in a passage between Dauphiné and Provence - and the Durance. Built on a rocky outcrop, is the first thing arriving in the city we see. The citadel, with its fortifications, was a strategic bolt on the road of the Alps to the Mediterranean. Historic monument is the centerpiece of the city. Jean Errard, military engineer of Henri IV, and Vauban have left their mark.The rock overlooking the gorge of the Durance has always been fortified. Nothing remains of the oppidum of Voconces, destroyed during the Roman invasion of Augustus (27 BC.), Nor the Roman castrum which succeeded him. From Roman times, there remains only a "Segustero" (Latin name of Sisteron), the remains of a mausoleum and a city along the "Domitian" ancient road that connected Italy to 'Spain.

How To Get To Citadelle de Sisteron (Map):