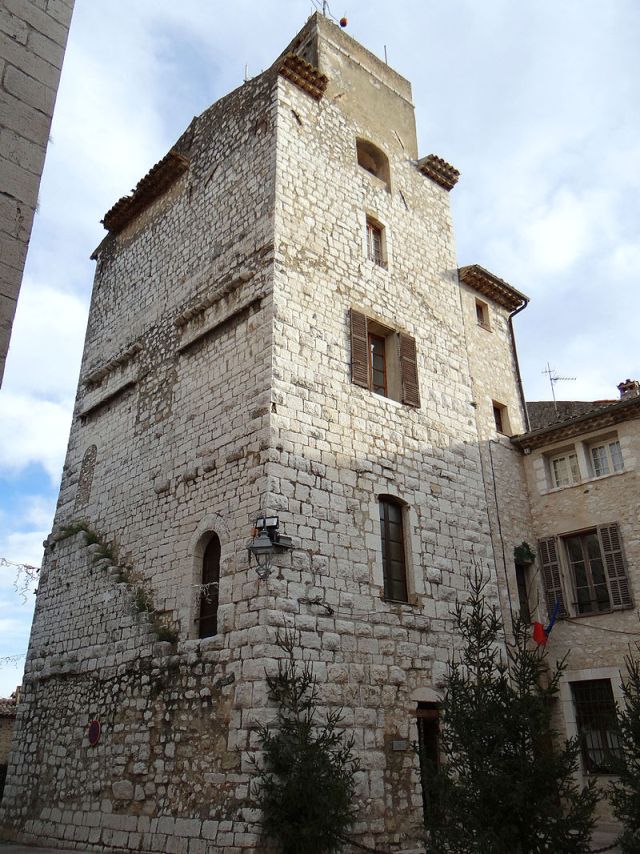 Location: Saint-Paul-de-Vence, in the Alpes-Maritimes departement of France (Provence-Alpes-Cote-d-Azur Region).
Built: 13th century.
Condition: In good condition.
Ownership / Access: Owned by the municipality.
Notes: Donjon de Saint-Paul-de-Vence or tower of the Town Hall, is what remains of the ancient castle in the commune of Saint Paul de Vence in the Alpes-Maritimes department.After the capture of the abbot of Cluny Maïeul, in 972, Count of Provence and Avignon, William the Liberator and the nobility of Provence with the help of the Smooth Ardouin III or the Bald count and marquis of Turin , drove the Saracens located on the coast of Provence where they threw looting operations. The Count of Provence was the winner of the Battle of Tourtour, in 973. The nobility of Provence was divided earned territories. The Rodoard Apt were the areas of the diocese of Antibes and Antibes qualifièrent of Prince and Lord of Grasse. Laugier Orange-Mévouillon who had a manor in the Alps and had married Odile and had received a dowry Vence and Cagnes. In the eleventh century has established the feudal system. A first castle to be built in St. Paul at the end of the eleventh century or the beginning of the twelfth century which remains the boss in Stone large apparatus base of the tower. The village was then built around the first turn.St. Paul is mentioned as a castrum at the beginning of the thirteenth century with manorial rights belonging to a knightly family of the same name. The dungeon was at that time the housing of the Lord, watchtower and stately symbol of authority. In 1227, the Count of Provence Raymond Berenger V granted the municipal charter to the community of the people of St. Paul. The castle is mentioned in 1251. The current tower had to be rebuilt in the thirteenth century. The city walls had to be built after 1363 or 1367 when the States General of Provence defense recommended the development and fortification of cities. In 1401, exceptional taxation lifted by Louis II of Anjou, Count of Provence, King of Sicily and Naples, enabled the repair of fortifications. From that time St. Paul will be called royal town due to the royal title held by Louis II. After the death in 1481 of Charles III, Count of Provence, King Louis XI seizes the county of Provence. The incursion of the imperial army commanded by the Constable of Bourbon, in 1524, then again in 1536, led Francis to give the city a bastion of the first speakers built in France. At the top of the tower was placed the bell ironwork in 1685. It houses a bell cast in 1443 and redesigned in 1637. Today the tower houses the village hall. The tower is vis-à-vis the collegiate church of the Conversion of Saint-Paul and the chapel of the White Penitents. The monument is the subject of a classification as historical monuments since 23 September 1922.