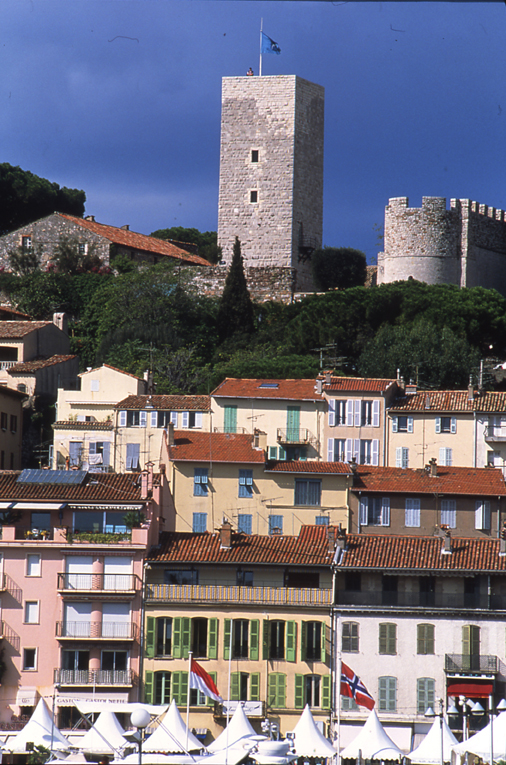 Location: Cannes, in the Alpes-Maritimes departement of France (Provence-Alpes-Cote-d-Azur Region).
Built: 15th century.
Condition: In good condition.
Ownership / Access: --
Notes: Musée de la Castre of Castre is up Castre at the top of the hill of Le Suquet, in Cannes, in the ruins of the medieval castle of the Lérins monks. This "museum of France" presents the collections belonging to the city of Cannes: primitive arts (or first) Himalaya-Tibet, Arctic, pre-Columbian America, Oceania, Mediterranean antiques, musical instruments of the world in Asia, Africa , Oceania, America, nineteenth-century landscape painting with the little masters of Provence.Built on top of Suquet hill overlooking the bay, all the museum buildings form one of the few witnesses of the Middle Ages in Cannes. It was built from the eleventh century on the initiative of the Lérins monks settled in their famous abbey of Saint-Honorat island since the fifth century. convent building (male monastery), it is built on a quadrangular plan, like a castle with dungeon, and it includes in its defensive walls a main building and a chapel. In the middle of the central courtyard stands a square tower whose height could allow lookout. For the princes of the church who were the abbots of Lérins, lords of much of the region, the castle of Cannes marked its architectural majesty that required the coastal landscape. Damaged from the late sixteenth century, the castle was partially destroyed in the eighteenth century by order of the Bishop of Grasse. Sold as national property during the Revolution to the Hibbert family, he served as housing remains until 1878, when it was leased to a ceramic factory "La Mont Chevalier art of pottery." In 1919, the town of Cannes acquires all the buildings to house the museum. The tower and the Chapel of St. Anne, together with the church of Our Lady of Hope a set MH ranked by order of 28 July 1937.

How To Get To Musée de la Castre (Map):