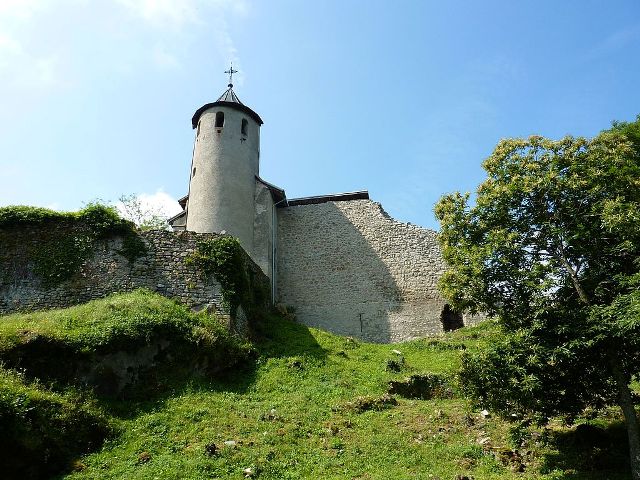 Location: Allinges, in the Haute-Savoie departement of France (Rhone-Alpes Region).
Built: 10th-11th century.
Condition: In good condition.
Ownership / Access: Currently owned by the Congrégation des Missionnaires de Saint-François-de-Sales.
Notes: The Château d'Allinges-Neuf is an ancient castle of the tenth - eleventh centuries, the remains of which stand, in Chablais, in the town of Allinges in the department of Haute-Savoie, Rhone-Auvergne region Alps. The ruins share the eminence of a hill, called "butt castles" with those of Allinges Vieux, which they are separated by 150 m. The castle was accompanied by a town surrounded by walls of which he did not manage to survive. The castrale pregnant, both barbicans defending the access to the southwest, the chapel and the adjacent former home (now occupied by the Missionaries of St. Francis de Sales), barn and vaulted cellars located to the south west of the chapel, the grip of the former borough castral occupying the southern half of the enclosure which are visible to habitat-related facilities or agricultural duties; plot including former and current access to Chateau Neuf are the subject of a classification as historical monuments by order of 24 May 2011.