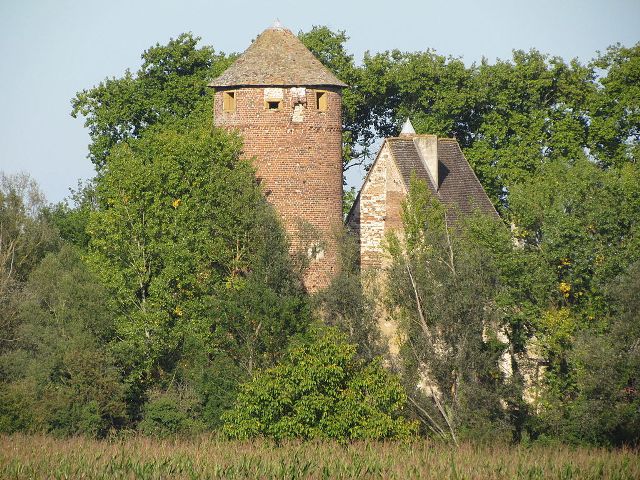 Location: Charentay, in the Rhône departement of France (Rhone-Alpes Region).
Built: 12th-16th century.
Condition: In good condition.
Ownership / Access: Privately owned.
ISMH Reference Number: PA00117732
Notes: Château d'Arginy is an ancient castle, founded around the mid-fourteenth century, rebuilt in the fifteenth century and remodeled sixteenth century, which stands in the municipality of Charentay in the Rhône department in Auvergne region Rhône-Alpes. It is very representative constructive modes in northern Lyonnais and Dombes. The castle is the subject of a partial registration under the Historic Monuments by order of 1 July 1974. Only the facades and roofs of the castle and moat common and registered. At the Gallic time, the site was the center of a forest where they operated a salt mine. During the Roman conquest, a lieutenant of Caesar, named Arginus, built a oppidum in this place, which subsequently took his name. This first red-brick building was to last nine centuries and it is on its ruins was built towards the middle of the fourteenth century medieval castle by a vassal of the lords of Beaujeu. The castle was probably founded after the sale by the Beaujeu family of a citizen of Montbrison, Guillaume Vernet or Verneys. In 1374 Guichard Verneys actually tribute. The family of the Vernet possessed until 1455 when he went to various subordinated families. The castle itself was composed of two concentric walls; the outer enclosure quadrangular, bass, is flanked by four circular turrets at the corners adapted for shooting firearms and is contemporaneous with that of the lower court. The quadrangular inner enclosure formed of house arranged around a small courtyard, and of which there remains a wing, and in turn flanked by three round towers; only two of which remain isolated in any unit once plastered. In the last corner, stands the beautiful main tower, called the eight Beatitudes, built of brick in the thirteenth century cylindrical plane outside, octagonal inside. The rectangular backyard has retained two round corner towers and is accessed by a gate tower that controls one of the two bridge-Levis.

How To Get To Château d'Arginy (Map):