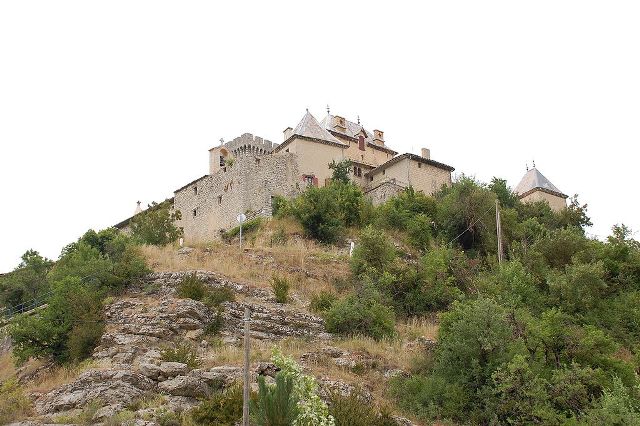 Location: Aulan, in the Drôme departement of France (Rhone-Alpes Region).
Built: 12th-20th century.
Condition: In good condition.
Ownership / Access: Privately owned.
ISMH Reference Number: PA00116885
Notes: Aulan Castle, built in the twelfth century on the site of a oppidum overlooking the valley Toulourenc was remodeled several times. It was a highlight of the strategic system of lords Mévouillon, you could also contact the parent by optical signals. Financial difficulties lead them to lose their Mévouillon barony and led Raymond IV to give Aulan his neighbor Hugues de Montbrun. In 1635, François-Marie Suarez marries Isabeau de L'Espine, heiress to the castle of Aulan she brings a dowry to her husband. Gradually, the castle undergoes changes and gradually becomes less defensive. At the revolution the castle was destroyed. Can be plundered and ruined. It was during the entire nineteenth century, the castle gradually rose by Louis Suarez of Aulan and his son Arthur. They also committed to developing the country and built the Thermal Establishment of Montbrun-les-Bains and do figure reforestation pioneers reintroducing the first Austrian pines. The restoration of the castle ends just in 1914 but the carnage of the Great War will touch Aulan and the castle was ruined and looted again. In 1933, the young Count Charles de Suarez of Aulan, took over and tackles his new reconstruction. Jean Giono, familiar places and the Count, there is one of its news where we find a description of the castle at the time: "Death to the Promenade." René Char, who had been taken in its resistance activities, also evokes the castle Aulan in one of the rooms of his "seasonal Theatre" Three shots under trees, under the title "On the hills "(1947). This book was to be fired the script for a film, shot on location in 1949 under the same title, with the assistance of Yvonne Zervos. An enigmatic poem of the author of Fury and mystery, "Cur secessisti? "Evoking the Resistance on the Drôme hills, finds its way from the epigraphic inscription of a Gallo-Roman tombstone unearthed by plowing and kept sealed in the castle courtyard. Now restored, the castle, which is listed as a historic monument, is open to visitors and contains many works of art including a beautiful Spanish pieta the fourteenth century, a work by Mignard and a table Joseph Duplessis. The castle has many interesting memories of the Second Empire.