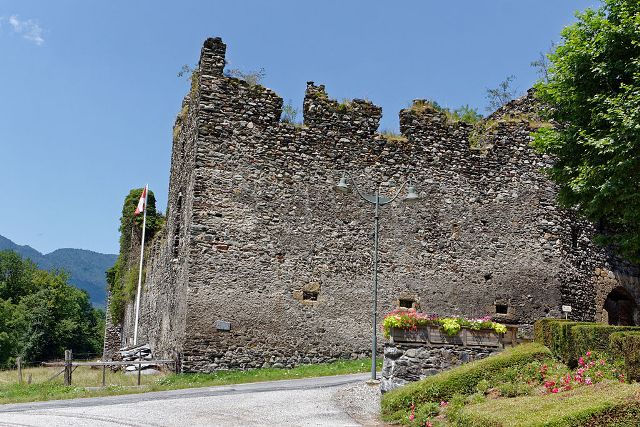 Location: Épierre, in the Savoie departement of France (Rhone-Alpes Region).
Built: 11th-12th century.
Condition: Ruins.
Ownership / Access: Private property.
Notes: Château d'Épierre is a former stronghold of the twelfth century, rebuilt in the fourteenth century and restored in the sixteenth or seventeenth century, the center of the lordship of Épierre, elevated to a barony, whose ruins stand in the town Épierre in the Savoie region in Auvergne-Rhône-Alpes. A rectangular enclosure formed of two parallel body of the house connected by a curtain, includes a chapel and a tower-residence, which occupies the western corner, arranged around a narrow courtyard. Southeast a large rectangular enclosure, originally trenched, a backyard fence. The oldest part, late twelfth century early thirteenth century, is a quadrangular building which is integral with the outer wall of the yard. It is crowned by a crenellated book, as the surrounding wall of the court that it is completed by a walkway. It is built illegally apparatus consisting of rollers and assembled in place "opus spicatum" alternated with stone flowerbeds. He would have sheltered domesticity, as well as stables and barns, etc. In the wall overlooking the court, the presence of a small square window there is tuff, which confirms its priority. In this building was adjoined the entrance porch. The stately home has been dated to 1335-1350 by dendrochronologie. It is more regular device drown a thick mortar. The corners as well as separations of floors are reinforced by a tuff chaining. It is bisected by a corridor and at every level. Above the door of the building entrance, the corridor of the first floor is lit at both ends by a double window Gothic trefoil, divided by a small column in tent topped with a three-lobed pink, complemented by a frame pointed arch. One overlooking the courtyard is the best preserved of the two. The interior meanwhile portends a fourteenth-century reconstruction and restoration of the sixteenth century and seventeenth century.