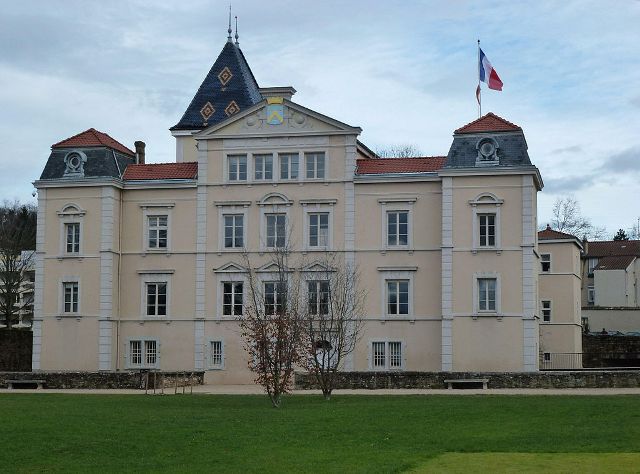 Location: Neuville-sur-Saône, in the Rhône departement of France (Rhone-Alpes Region).
Built: 15th-16th century.
Condition: In good condition.
Ownership / Access: Privately owned.
ISMH Reference Number: PA00118007
Notes: Château d'Ombreval is located in the municipality of Neuville-sur-Saône, in the town center, in the city of Lyon. The castle was built between 1587 and 1593, has been significantly modified, especially by the architect René Salagnac between 1961 and 1968. It now occupies a rectangular plan, compound, west side of a main building and east side, of two buildings forming an L and bordering a courtyard. The whole is flanked by four square corner flags and slightly advanced. A square tower is in the northeast corner of the main building. The buildings stand on three levels and a level attic. The western facade has five bays, the three central spans being topped by a pediment displaying the arms of Villeroy Neufville. The moat surrounding the castle is spanned by a bridge to the east, and by three stone bridges on the other sides. The park says Ombreval Park, is on two levels, west and north. On the lower level, yet we find the location of an ancient basin, the center of a French garden and, at the northern edge of the park, a nymphaeum, flag-shaped cave, built around 1636 and ranked 25 August 1927. The outbuildings are home since 1966, the youth and culture of Neuville-sur-Saone.The castle is named after its first owner, making the building in 1458, on land belonging to Antoine Louat. It then passes the Lyon family Buatier. In 1586, Pierre de Saint-Priest Épinac (1540-1599), Primate of the Gauls, and his sister, Claude Epinac (born in 1547), lady Grésolles and Colombier, acquire community property Symphorien Buatier , Lord of Montjoli, for the sum of 7500 crowns. In 1599, Madame de Grésolles sold the castle to John the Baptist Livet, secretary of the prelate, to pay the debts of his deceased brother. June 18, 1630, Camille de Neufville de Villeroy, then 24 years old and abbot of Ainay, 41000 buys books the baronial estate of which the castle, home to be erected in marquisate in 1666; in 1658, Archbishop of Lyon for 5 years, it hosts the Grande Mademoiselle and the following year, Louis XIV. On the death of the former, in 1693, his nephew, Neufville Marshal François Villeroy (1644-1730) inherited the property. In 1730, the property reverts to the granddaughter of the former, Marie Madeleine Angélique de Neufville Villeroy (1707-1787), who married in 1721 Joseph Marie, Duke of Boufflers (1706-1747) and in 1750 Charles François Montmorency-Luxembourg (1702-1764). Marie Madeleine Angélique sells the estate to his daughter, Amelie de Boufflers (1746 - 1794), wife of Armand Louis de Gontaut, Duke of Lauzun (1747 - 1793), who were guillotined. During the Revolution, the castle is on the list of national assets. From 1818 three owners succeed Mr Rambaud, Mr. Péricaud and Mr. Vergnais, wine merchant. In 1961, Mr. Laurent Vergnais and sister Ms. Bertrand, son and daughter of previous, donate the castle to the town which will make its town hall.