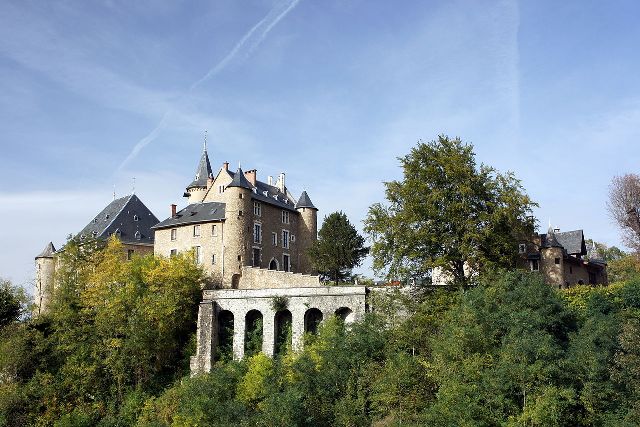 Location: Saint-Martin-d'Uriage, in the Isère departement of France (Rhone-Alpes Region).
Built: 13th-16th century.
Condition: In good condition.
Ownership / Access: Private property.
ISMH Reference Number: PA00117261
Notes: Château d’Uriage is an ancient castle of the thirteenth century substantially rebuilt in the sixteenth and nineteenth centuries, which stands in the municipality of Saint-Martin-d'Uriage in the Isère department in the Rhône-Alpes region. Under the monument, castle, terraces and south pit, pavilions, moats, the courtyard with its gates and walls, the common roofs and facades as well as the wide avenue leading to the castle are the subject of a classification by order of 25 August 1997; Castle Park is the subject of a partial registration by order of 25 August 1997.The castle has three massive main building, erected around a courtyard, flanked at the corners round towers. The largest and highest being dungeon office. It is likely that there remain elements dating from the time of its construction by Alleman the thirteenth century, but most buildings from rearrangements of the sixteenth and nineteenth centuries.