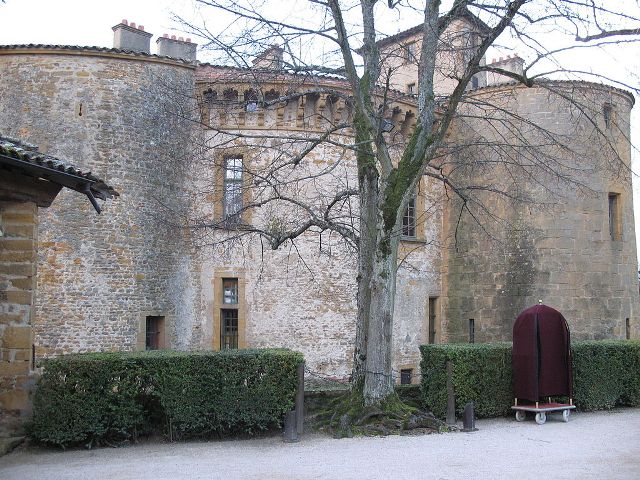 Location: Bagnols, in the Rhône departement of France (Rhone-Alpes Region).
Built: 16th-17th century.
Condition: In good condition.
Ownership / Access: Owned by a private company.
ISMH Reference Number: PA00117716
Notes: The Château de Bagnols is an ancient castle, the thirteenth century, dramatically transformed in the fifteenth century and in the eighteenth century, which stands in the town of Bagnols in the Rhône department in Auvergne region Rhône-Alpes. Situated in the heart of the country of golden stone, it is surrounded by vineyards, and now houses a luxury hotel. As historical monuments the castle, with the exception of classified parts subject to registration by order of 7 June 1926, the dovecote, the moat and terraces with their two loggias are subject to registration by a decree of 3 September 1974 the facades and roofs of the castle, common, speaker towers and pavilions, and the following parts of the castle with their decor: guard room, dining room and music room on the ground -chaussée; billiard room and Louis XV room on the first floor; two parts located respectively in the West Tower and the East Tower, wall, terraced retaining wall and those moats, bridges over the moat are subject to a ranking by order of 21 December 1984.

How To Get To Château de Bagnols (Map):