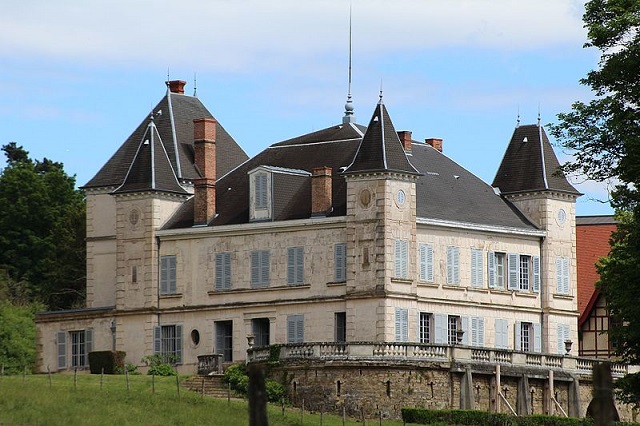 Location: Saint-Étienne-sur-Chalaronne, in the Ain departement of France (Rhone-Alpes Region).
Built: 1865.
Condition: --.
Ownership / Access: Private person.
Notes: The castle of Beaumont is a castle of the nineteenth century which stands on the town of Saint-Étienne-sur-Chalaronne in the department of Ain and the region Auvergne-Rhône-Alpes. He succeeded to a fortified castle of the Middle Ages high on motte quoted in 1330 and shaved towards 1853. The whole stables and roofs of the castle, the well, the vegetable garden, its fence and its pavilions, the castrale motte, the whole of the plot except the tennis court are registered in the Title of the historic monuments by decree of 5 July 2006.A first castle erected on a cloistone is mentioned around 1330. The fief possessed in all justice, with the castle, is given at this date to Étienne de Laye, by the sire de Beaujeu. In 1372 he was the possession of Pierre de Marmont, and in 1374, that of Fromentin du Saix, in whose family he remained until Lionnet du Saix, who left him to Claudine de Ponceton, his widow, who donated it , On April 15, 1571, to his nephew Lionnet de Challes. The latter sold it to Daniel Gilles, lord of Montezan, on whom he was seized and awarded, in March 1626, to Abraham Valier, adviser to the parliament of Dombes. The land of Beaumont then passed successively to the families Janin, the Garde, Joli de Choin, Collabau and Trollier. In 1759, Jean-Baptiste Trollier, an equerry, sold it to the under-age children of the late Louis-Hector de Cholier, a knight, count of Cibeins, who still owned it in 1789. Several times remodeled, the castle will be razed around 1853 to make room for a new building in the nineteenth century.