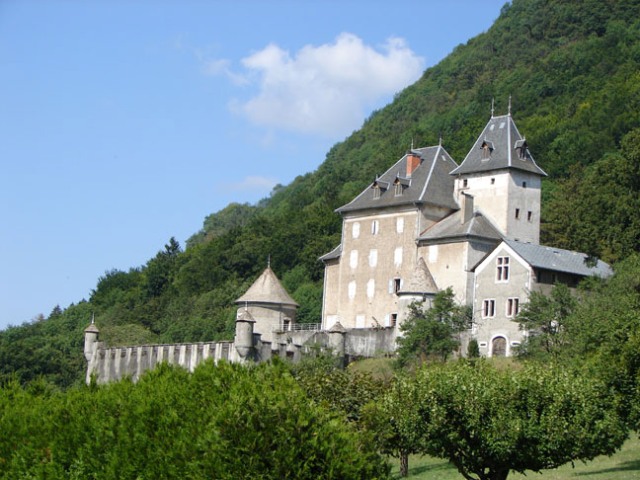 Location: Saint-Jeoire-en-Faucigny, in the Haute-Savoie departement of France (Rhone-Alpes Region).
Built: 13th-20th century.
Condition: In good condition.
Ownership / Access: Currently owned by The diocese of Annecy.
Notes: The Château de Beauregard is a former stronghold of the thirteenth century, which stands in the municipality of Saint-Jeoire-en-Faucigny in the department of Haute-Savoie region Auvergne-Rhône-Alpes. The castle's history, closely linked to that of the Fletcher family, vassals of the lords of Faucigny, probably from Scotland, quoted in the twelfth century, that of Faucigny and Savoy States generally has been very eventful. Burned and looted several times, including by the troops of Geneva and the French Revolution, its interior had to be completely rebuilt several times, the ripe, however, remaining in place. Witnesses of these reconstructions still exist, including a mullioned window walled beneath the plaster of the south facade, whose location reflects the different positioning stages at the time of its construction. The castle was erected in the twelfth century by the family of Fletcher. The white paint strip below the roofs commemorates the participation of a member of this family to the "crusade" of Count Verde, Amadeus VI of Savoy in 1366. It was burned by 15893 in the Bernese invasion and restored by the after. The castle remained in the family until 2004 Fletcher either for 8 centuries, the date when its owner donated the diocese of Annecy entrusts it to a charismatic religious community wishing to Franciscan inspiration, Eucharistein brotherhood in 2008.