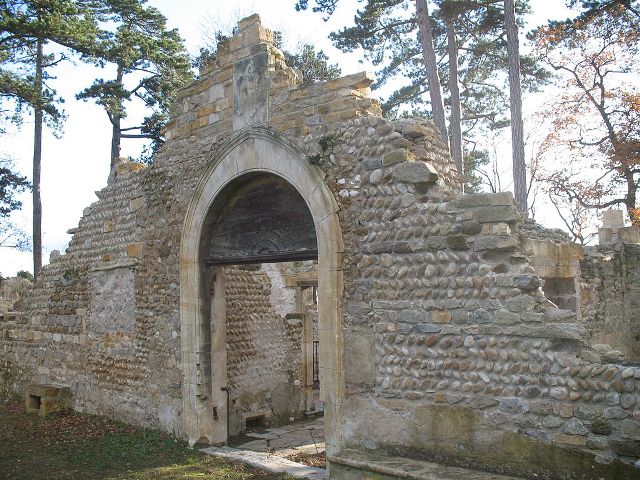 Location: Saint-Genis-Laval, in the Haute-Savoie departement of France (Rhone-Alpes Region).
Built: 13th-20th century.
Condition: In good condition.
Ownership / Access: Owned by the municipality.
ISMH Reference Number: PA00118034
Notes: Château de Beauregard, olim Fizicat house is an old fortress, founded in the fourteenth century, profoundly altered in the sixteenth and seventeenth centuries, the ruins stand in the municipality of Saint-Genis-Laval in the city of Lyon in central France -Rhône Alps. The castle is the subject of a partial registration as a historic monument by decree of 20 July 1943. Only the main building, the Orangerie, the Nymphaeum, the park and the walls supporting the terraces are enrolled.The castle is a former possession of the archbishops of Lyon. Clement V resided there, in 1305, after his coronation. In the fourteenth century, Gaspard de Chanvey, lord of Saint-Genis-Laval, built a property. The end of the century until 1526, Jacques d'Amoncour, canon-count of Lyon in 1475, owns the land. The castle was sold for 2200 gold crowns to Peter Gadagne (1526-late sixteenth century) who became lord of Beauregard, but gives little after the feud with his brother Thomas II, a banker whose opulence earned him the expression Lyon "rich like Gadagne". This, in memory of the origins of his family, is develop the site in the Florentine style of the time. In 1564, his son Thomas III, it receives Queen Catherine de Medici during the passage of Charles IX in Lyon. In his will written in 1594, Thomas transmits the fief to his second son, Claude (1585-1641), esquire, teaches under the command of the Duke of Lesdiguières. Claude wife Eleanor of Coligny, debt-ridden, is selling well.Michel Fizicat (1618-1684), Lieutenant Colonel of the regiment and first Dauphin infantry sergeant, gentleman of the King's Chamber, Knight of the Order of St. Michael, acquires the property after receiving acclaim in 1655. Antoine (1684-early eighteenth century), his son, succeeded him. It is the king's counselor, secretary and chief clerk of the finance office in Lyon, Lord of Beauregard and Bellievre. He married in 1688 Marguerite Mareschal. Their son Jean-François (1690-), Lord of Beauregard and Bellievre wife Catherine in 1726 Berthet. Jean-Baptiste (1730-1793), second son of the previous wife Catherine in 1762 Gonin of Lurieu and dies victim of the Terror. Jean-François, Marquis of Fizicat, who married in 1789 Elizabeth Catherine Chazaux, and Thomas, canon of Ainay, son of previous, inherit the estate in 1812 but sell to individuals. Jean Ricard in 1978, the last owner, assigns the field to the city of Saint-Genis-Laval that the landscape into a public garden.