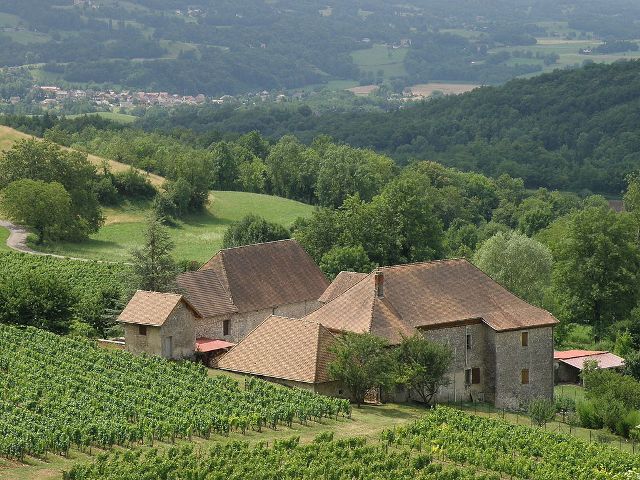 Location: Saint-Jean-de-Chevelu, in the Savoie departement of France (Rhone-Alpes Region).
Built: 14th century.
Condition: In good condition.
Ownership / Access: Private property.
Notes: Château de Bergin is a stronghold of the fourteenth century, the center of the Lordship of Bergin, who stands in the municipality of Saint-Jean-de-Chevelu in the Savoie region in Auvergne-Rhône-Alpes. The castle is today, especially when one sees the departmental 210a, as a farm square, consisting of a main house, barns and stables arranged around a courtyard, which gives access a portal partly preserved. The first state of the building, when it was still primarily a defensive construction, remain walled semi-circular tower, adjoining the main building, a breakthrough arbalétrière and a gunboat, and a few scattered architectural elements such as a window lintel accolade, the Gothic cellar door, and the low door of the tower, the stone carved ogee jamb. However, the door semicircular and other openings in the main building reflect revisions made in the seventeenth, eighteenth and nineteenth century. On the opposite side to the main house, barns and stables are distinguished by some remarkable details such as a wooden lintel door curve, a low arch gate decorated with the crest of Drujon, and the remains of a lintel ornate. None of this is visible from the highway; Castle, which remains private property, is not currently visitable. The new owner PERCEVAUX family operates the surrounding vineyards, which is classified as AOC. The planted grape varieties are Jacquère Highness and for whites and Gamay for reds and Mondeuse. The production, under the label of Château Bergin, is sold to a wholesaler Jongieux, which ensures its bottling.