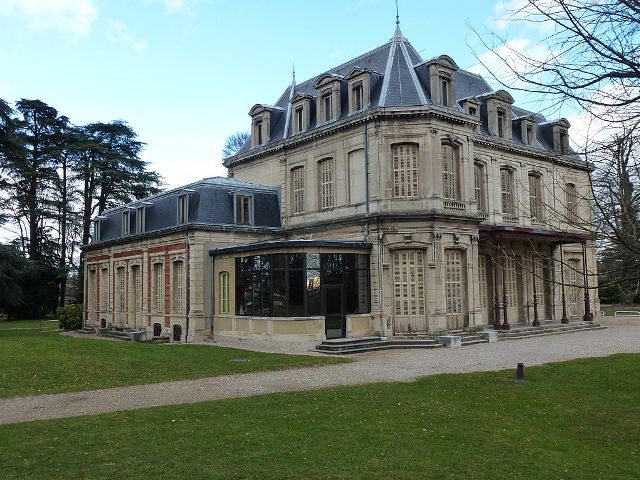 Location: Saint-Marcel-d'Ardèche, in the Ardèche departement of France (Rhone-Alpes Region).
Built: 1852.
Condition: In good condition.
Ownership / Access: --.
Notes: Château de Bernis is located in the municipality of Sathonay-Village in the city of Lyon, near the ravine of the valley.The castle, built in 1852, comprises a main building, which is on two levels and a level roof and a flag of one level and a level roof, the whole forming an L, the tip angle the Saône valley. Some modern amenities have been added since the installation of the Town Hall. The main building in stone, is generally in a rectangle. The southern facade has from west to east, advanced polygonal shape, a front building of three bays and a wider span. The pinion is comprised of three spans with the first level, two spans in Advanced supporting a balcony enclosed by a balustrade. The north side has seven bays, three of them forming a front body slightly forward. The windows of the attic is surmounted by circular or triangular pediments; the pediment of the central window of the south facade, are listed in the midst of foliage nested letters O and C (for Oscar Gallina). The pavilion, meanwhile, combines brick and stone; its west facade has six bays, gables, one. The layout of the slate roof is combined with the vertical lines of construction. The castle is located in the heart of a wooded and hilly park, adjacent to the village church, from which the view of the Saone valley and mountains of Lyonnais. Outbuildings complete the set, including the Chalet.The first owner of the castle is Oscar Gallina Louis Auguste (1812 - 1881 Sathonay), banker and vice-consul of Switzerland Lyon1. He married in 1841 Anne Brouzet (before 1828-1861); he married in 1867 with Marie Anne Mathilde Fombert Villers (born in 1825); his second wife had several children from a first marriage with General baron Joseph and Victor Thomas (1812 - 1859), whose Henriette Thomas (1851 - 1944), sometimes also called Henriette Thomas Gallina. Heiress of the property, Henriette wife in 1872 Pierre, Count Pierre de Bernis (1841-1902) to be mayor of Sathonay. Suzanne Marie Pierre de Bernis (born 1875), previous daughter, inherited the estate; she married in 1903 Paul Delpech of Saint-Guilhem (1870 - 1953). The town acquired the castle in 1952 and set up the town hall in 1965.