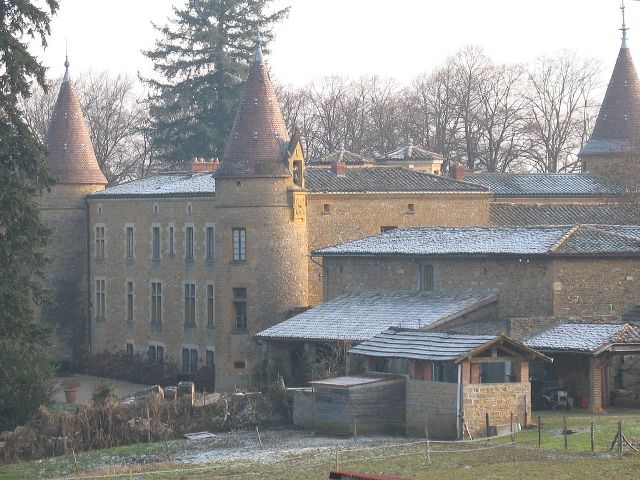 Location: Lacenas, in the Rhône departement of France (Rhone-Alpes Region).
Built: 18th-19th century.
Condition: In good condition.
Ownership / Access: Currently owned by Erick Roizard les Editions de Bionnay.
Notes: Château de Bionnay is located in the village of Lacenas, west of Villefranche-sur-Saône in the Rhône department. Many families have succeeded at Bionnay: the Marzé are the first known Bionnay lords, they own in the first half of the sixteenth century Gaspard then take the stronghold in the second half of the sixteenth century. Claude Gaspard, Gaspard Jean are two representatives. Amable Thierry acquires title in 1611, his daughter Marie, lady Bionnay and Vaux, wife Jean in 1643 Champier, Baron Juis, bailiff of Beaujolais. Louis Mabiez became lord of Bionnay in 1656, and Anthony of Monspey (1661 -), knight, lord of Bionnay is called Count Valliere; he married in 1678 Jeanne Charlotte Champier Rabutin and son of Joseph-Henri (1695 -), captain of dragoons in the regiment of Bauffremont, inherited the estate; He married in 1726 Mary Anne Livia Pontevès. Alexis Noyel Belleroche bought the castle in 1749. He observes: "All the walls have to be re-meshed, the gallery of the morning side is ready to fall in the garden, the rest is in keeping." The property passes Thivel Mr. Félix Fournier in 1857 then acquires in 1902 and in 1934, the family Buckler succeeds him. At the end of the twentieth century, more purchasers succeed. In 1995, Morgane Rousseau creates the residence of artists who became one of the scenes of contemporary art .. In 1999 Erick Roizard owner Poliphile group, bought the property, restores, installs a subsidiary of its group which will become "the Editions of Bionnay "and created gardens that get the Remarkable gardens label in 2011. at the end of the twentieth century, the park is restored. The park is open to visitors, spread over four hectares. It includes a French garden, a cave and small gardens on the theme of the rose.

How To Get To Château de Bionnay (Map):