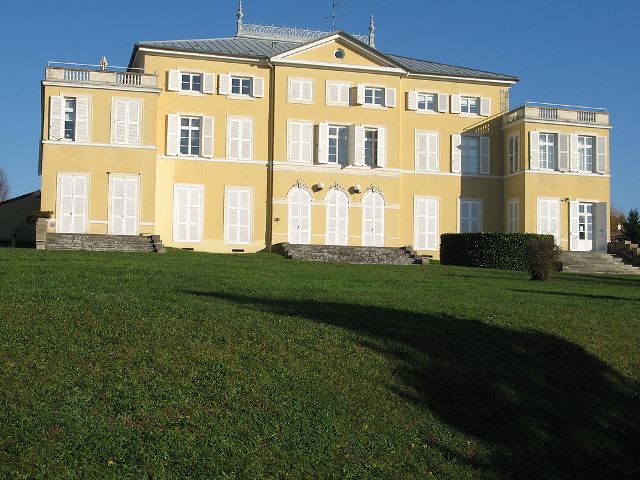 Location: Lissieu, in the Rhône departement of France (Rhone-Alpes Region).
Built: --
Condition: In good condition.
Ownership / Access: Private property.
Notes: Château de Bois Dieu is a historic building in the town of Lissieu, in the city of Lyon. The castle is located in the town of Lissieu, northwest of Lyon, near the Semonet stream, tributary of the Azergues. In 1640, Antoine Baud buys the field Boscdi Claude Verdier, son of the writer Antoine du Verdier, and began building the castle. At the end of the seventeenth century, the owner is Mr. Claustrier. In 1840, Mr. Fleurdelys acquired the estate; he built the Chapel near the castle. During the summer of 1944, the 1st squadron of the 8th regiment of African hunters moved to Bois God. The castle is currently located in the heart of the residential park of the same name, between the National 6 and the A6; Since 1988, the chapel belongs to the town of Lissieu. The castle consists of a main building and two pavilions forming a "U" to the west. The home includes a central body slightly advanced topped by a triangular pediment. The roofs of the houses are terraced. The central body and the flags are preceded by stone steps.