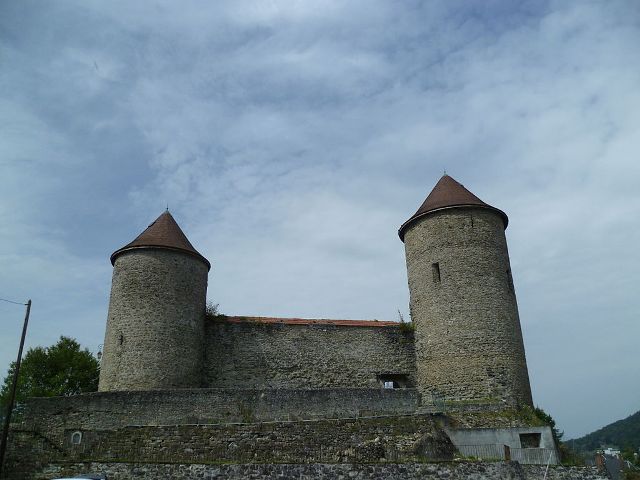 Location: Bonneville, in the Haute-Savoie departement of France (Rhone-Alpes Region).
Built: 13th century.
Condition: In good condition.
Ownership / Access: Owned by the municipality.
ISMH Reference Number: PA00118364
Notes: Château de Bonneville is an ancient castle of the thirteenth century, restored in the sixteenth century, the remains of which stand in the town of Bonneville in the department of Haute-Savoie, in region Auvergne-Rhône-Alpes. The ruins of the old count's castle are the subject of a registration as historical monuments by order of 3 November 1987. The regular plan of Bonneville Castle is the epitome of the castle called "Savoy square". It comes in the form of an enclosure, originally trenched, quadrangular wide 18 meters long and 85 meters, flanked by round towers at each corner in pepper. There remains only two on the eastern side. Erected to the east, the "Black Tower" and "White Tower", respectively 21 meters and 15 meters high, were erected by Beatrice Faucigny, daughter of Pierre II of Savoy. They are separated by a curtain of 18 meters, behind which is the stately courtyard. These are the oldest parts of the castle that have survived. One reached the castle framed by a fortified gate with two towers and preceded by a drawbridge. The western part, by the development of prisons, has been completely disfigured, except a pretty walled window, located in the south curtain wall. The highlight of the rock located at the northwest corner is occupied by a cylindrical tower of 9.75 meters in diameter and 14.50 meters high. This isolated mistress circular tower was probably built in the second half of the thirteenth century. Inside is the Gothic chapel dedicated to St. Catherine. Because of its condition, the castle is not open to the public.