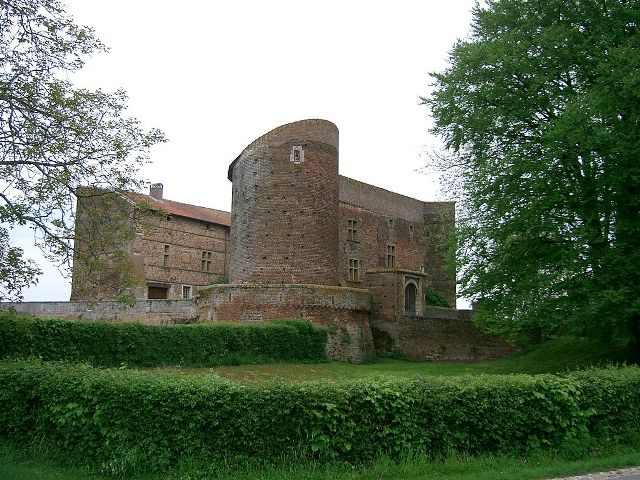 Location: Bouligneux, in the Ain departement of France (Rhone-Alpes Region).
Built: 14th century.
Condition: In good condition.
Ownership / Access: Privately owned.
ISMH Reference Number: PA00116316
Notes: Château de Bouligneux is a former stronghold of the early fourteenth century rebuilt in the late sixteenth century or early seventeenth century, the center of the Lordship of Bouligneux and a capital of command of Bresse, which stands the town of Bouligneux in the Ain department in the region Auvergne-Rhône-Alpes. The castle is the subject of a registration under the Historic Monuments by order of 15 November 1926.The town of Bouligneux is in 1280 the possession of Vaucher of Commarrain, knight, lord of Châteauvilain, which sells it with the consent of his wife, on the Saturday before Palm Sunday 1290, Henri de Villars, Lord of Trévoux, chamberlain, canon, then archbishop of Lyon, who will enjoy until his death in 1301. On that date it leaves Bouligneux his nephew Humbert IV Thoire-Villars, who enfeoffs in fairness to 1306, Girard La Palu, Knight, Lord of Varambon, Richemont and Tossia, with power to build a castle or a fortified house, with the exception only of sovereignty and jurisdiction. We over as lord Hugues de La Palud, knight, which in 1337 will receive a dowry from his wife Isabelle of Juis the manor and castle Juis.This will lay the first foundations of the castle that Hugues de La Palu, Knight, Lord of Bouligneux and San Julin (Cremieu), Puisne Palu and grand-son of Girard completed and is at the origin of the branch Bouligneux. This branch will be extinguished in 1413 with Anne La Palu, lady Bouligneux, married to François de La Palu, Knight, Lord of Varambon, which gives its consent to the land of Bouligneux Aynarde La Baume, her mother, to enjoy a form of scrip to pay the sum of 8000 florins, she paid for her ransom after his capture at the battle of Anthon. Anne de La Palu died childless appoint her husband as heir; thus the lordship of Bouligneux did return to the elder branch of La Palu.By way of 24 November 14354, François de La Palu, became Comte de la Roche and little Pierre, yawns the lordship of Bouligneux with that of Varambon, by exchange, Marguerite de Charny, widow of the Comte de la Roche, against the lordships of Beaumont-sur-Vingeanne, near Montfort Montbard Savoisy Thury and with the approval and consent of Louis of Savoy, Prince of Piedmont, eldest son of Amédée VIII of Savoy and his lieutenant general in all its states, 6 May 14364. This exchange lasted only a short time because Claude La Palu, knight, Lord of Varambon, Comte de la Roche, son and heir of François de La Palu, was lord of Bouligneux and said the stronghold of the Duke of Savoie. Died without heir he refers to his brother, Jean de La Palu, abbot and lord of Luxeuil (Luxeuil-les-Bains), who becomes lord of Bouligneux. The latter have all his property in favor of its parent Jean Philibert The Palu, Count de Varax who also died childless in 15274. He then succeeded his cousin Jean de La Palu, Knight, Lord of Jarnosse, and after him by Claude legacy of Rye, his widow Marquise Varambon and two daughters. Claude treaty of 22 May 15444, shall return the land of Bouligneux with other lordships Richard La Palu, Knight, Lord of Meilly, his successors under this treaty and another is in the Villars-Sexel 15 July 15814 will remain until the seventeenth century.The death occurred in the late seventeenth century by Jacques-Claude La Palud, Knight, Count of Bouligneux, Marie-Henriette de Fay's Kit, his widow, will retain the Bouligneux County for its dotales times and bequeathed his rights to his nephew Paul-François Le Hardi, who deals in 1721 with Jacques-Claude heirs of La Palud and sell at 150 000 pounds earth Bouligneux November 22 next to Agésilas-Gaston Grossole, Marquis of Flamarens, whose the family still enjoyed in 1789. The land and castle of Bouligneux were then owned by the Earl of Rességuier, deputy to the National Assembly.