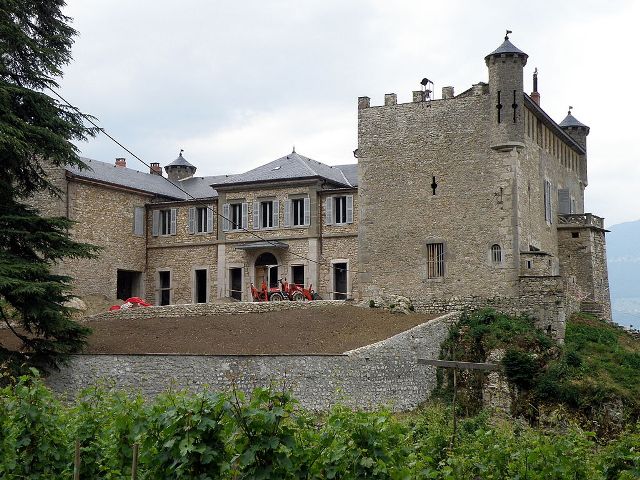 Location: Bourdeau, in the Savoie departement of France (Rhone-Alpes Region).
Built: 14th century.
Condition: Restored.
Ownership / Access: --
Notes: Château de Bourdeau is a former stronghold of the fourteenth century, rebuilt and restored in the nineteenth century, the center of the Lordship of Bourdeau, elevated to a barony, which stands on the town of Bourdeau in the Savoie region Auvergne-Rhône-Alpes. Originally, two moated enclosures drilled loopholes, flanked by crenellated towers, encloses a square house built on the rock on which it is established. Its thick walls were pierced only a few narrow openings. At their tops ran a walkway embattled and provided with battlements. corbelled turrets endowed in the four corners and all dominated by a watchtower. The house was distributed by a staircase made in the thickness of the walls. One reached the castle after passing two doors accosted turrets and provided both a harrow, operated from a guard, and preceded by a drawbridge. In this space, besides the stately home, near the southwest corner, leaning on the south façade stood the dungeon. Common found their places in the north and a small vegetable garden. An isolated building housed falconry. A chapel is mentioned from 1493 to 1673. Today Bourdeau was restored by Joseph Girod which has restored it to its former appearance, is a troubadour style castle. The home is fitted at the corners of pepper on base. All its walls, raised are crowned with battlements equipped with battlements. An English garden created at that time completes the package.

How To Get To Château de Bourdeau (Map):