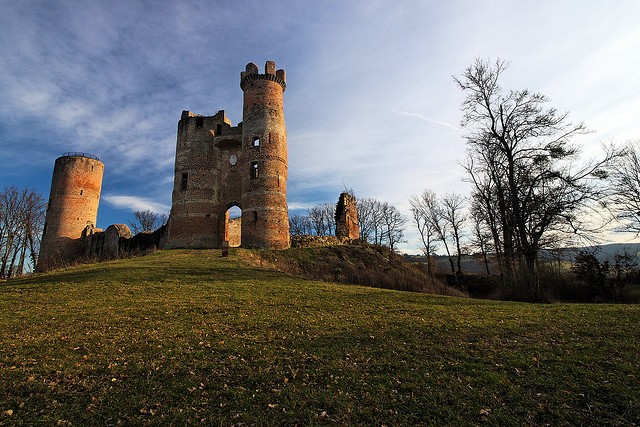 Location: Bressieux, in the Isère departement of France (Rhone-Alpes Region).
Built: 13th-17th century.
Condition: Ruined.
Ownership / Access: Owned by the municipality.
ISMH Reference Number: PA00117129
Notes: Château de Bressieux is an ancient castle of the thirteenth century whose remains stand in the town of Bressieux in the Isère department in Auvergne region Rhône-Alpes. The castle was the seat of the barony of Bressieux, one of four that had the Dauphiné, erected in marquisate by King Louis XIII in 1612. Built in red brick, it is now freely open to visitors and is also used to nowadays for role-playing life size. The ruins of the old castle are the subject of a classification as historical monuments by order of 16 August 1904.The castle is built on top of the hill overlooking the village. The enclosure has a gatehouse of the last quarter of the thirteenth century is surrounded by a dry moat impressive still visible. Inside, excavations have revealed numerous traces of dwellings of thirteenth and sixteenth centuries. The entrance is flanked by two crenellated round towers partially gutted that form gatehouse that have been raised twice and have traces of the ancient battlements. A drawbridge disappeared, but the anchor pivots is still visible in the doors towers, preceded a portcullis, which we still see the grooves. The towers are pierced by tall straight archers. The courtyard houses the ruins meager kitchens with traces of oven, joint and an ice cellar, well over 20 m deep and the main building with the remains of chimneys and coussièges windows. The keep or main tower, circular dérasée still high 23 meters, is still standing. It was reached by a pointed arch door located high; above the recent low opening. Its walls are 2 meters thick and a very narrow staircase built into the thickness of the wall serves three levels. The tower is pierced with loopholes and short straight that protected the long curtain. Two large windows windows were opened once abandoned the defensive function. From the panoramic summit of the surroundings.

How To Get To Château de Bressieux (Map):