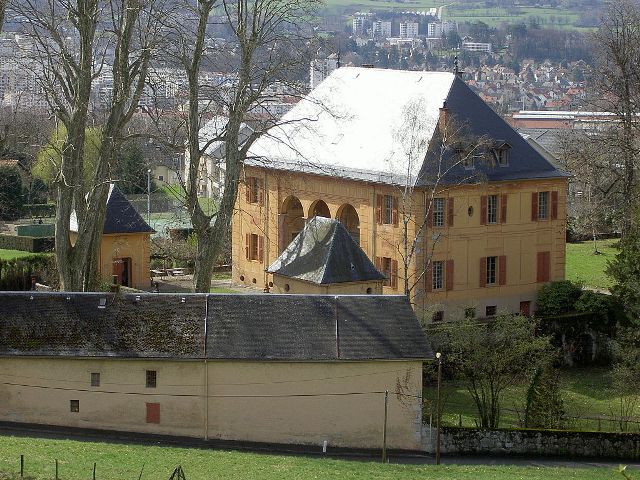 Location: Chambéry, in the Savoie departement of France (Rhone-Alpes Region).
Built: 16th century.
Condition: In good condition.
Ownership / Access: Private property.
Notes: Château de Caramagne is a private chateau in France in the town of Chambery, in the Savoie region in Auvergne-Rhône-Alpes. The castle is the subject of a partial inscription as historical monuments since 3 January 1963. The origin of this old house is much older than might be assumed decoration. The lawyer Bernadino Becchi, born in the small village of Caramagna in Piedmont, was the builder of the sixteenth century. Ownership then passed to the Bertrand family of Perugia, then Frédéric Bellegarde in 1783. The decoration of the living room (late eighteenth century) such as facades (early nineteenth century) would have been realized at the time of this owner by Piedmontese artists whose names are unknown. In 1812, a former soldier, Joseph Gillet, takes possession of the house, but the rents in 1820 to the Marquise de La Pierre, a British married to Chambery, and one of his compatriots, Ms. Birch. The poet Alphonse de Lamartine meeting in 1819 the daughter of the latter, Marianne Elisa Birch. A year later, they married at the castle. The large living room - decorated with stucco - is still celebrated by the marriage contract signed on 25 May 1820. marble columns supporting the balcony in the style of Italian palaces. The tempera paintings have a perspective false columns. The ends of the loggia, two groups imitating the sculpture included the abduction of Deianira by the Centaur Nessus, left, and the abduction of Europa by Jupiter.à right Within the castle, you can admire a ceiling covered with a stucco decorations while rock and scrolls, all arranged around a vaulted chamber placed at the center of the room. Three elements of the castle are listed as historical monuments of France: a pavilion in 1963, a rise in 2001 and the roof in 2003. The domain Caramagne gives the Italian paces around Chambery. An imposing entrance, surrounded by common semicircular, opens onto a large plane trees.

How To Get To Château de Caramagne (Map):